Almost a Century of Freemasonry in White Rock

The creation of a Masonic Lodge in White Rock occurred over the years of 1925-26 with the formation and dispensation by the Grand Lodge of BC & Yukon of Joppa Lodge No. 112. Originally meeting at a building on Marine Avenue (formerly Washington Avenue) the building couldn’t quite accommodate a growing Lodge and even needed a step ladder for access.  In 1950, the property you are standing on was purchased with debentures sold to the brethren (communal ownership) and the building you see was constructed.

Two Lodges meet at this hall. They are the namesake, Joppa Lodge No. 112, and St. James Lodge No. 80, as well as the Bethel chapter of Jobs Daughters, a Masonic organization for young women and girls. Joppa Lodge gets its name from the ancient port of Jaffa (Joppa) in Israel.  Freemasonry has many connections to the ancient Holy Land (something to ask a Freemason about). St. James Lodge had a long and difficult road from Vancouver to White Rock and both lodges experienced declining attendance and membership during the years of WWII.  Both Lodges have survived and thrived in this community, and both take great pride in community involvement and charitable endeavours.  You can Learn more about these two lodges further down the page 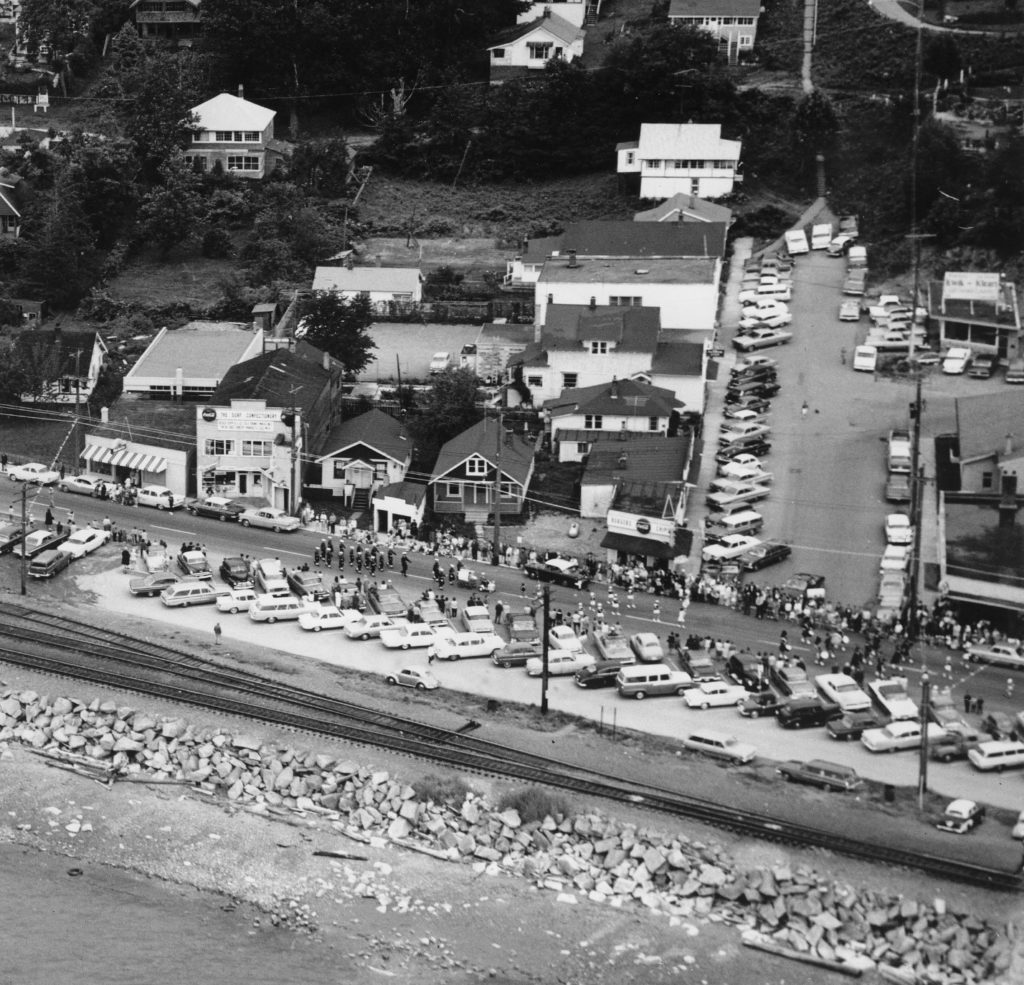 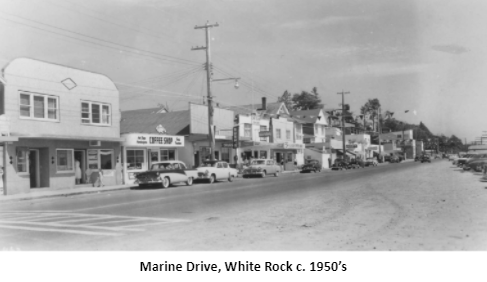 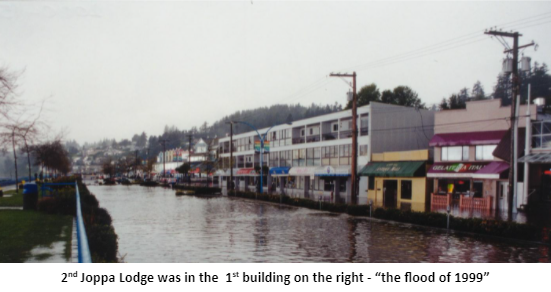 They came from Eastern Canada, over the seas, and across the border. Like you, each man shared a common goal; the desire to improve their community while improving themselves. Joppa Lodge takes its name from “Jaffa,” an ancient port city on the Mediterranean Sea. Jaffa is the oldest part of the city of Tel Aviv, Israel.

In ancient times, builders floated cedars from Phoenicia to Joppa, later transporting them to Jerusalem to construct King Solomon’s temple. Jaffa was the main entry point for pilgrims visiting the Holy Land. It was Alexander the Great who gave it the name Joppa. Today, Jaffa is famous for its biblical stories, mythology, and oranges.

On April 15, 1925, the Grand Master of the Grand Lodge of British Columbia issued dispensation to the new Lodge.  With the recommendation of the District Deputy Grand Master of District 2, the Lodge received its charter, being constituted on June 23, 1926.  The first meetings took place at The Joppa Masonic Hall on Washington Avenue, now known as Marine Drive.  Joppa Masons purchased a mortgage and set up on the second floor of a garage.  To attend meetings, members and guests had to climb an outside stepladder.  On April 27, 1939, the members called a special meeting to celebrate the “burning of the mortgage.” 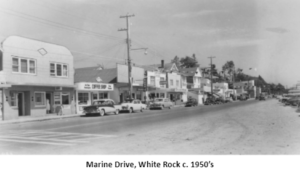 From 1940 to 1945, Freemasonry in B.C. continued through the second World War, the beginning of which coincided with the Grand Lodge of B.C. celebrating its 70th birthday. Because of the war, no celebrations for this very young Grand Lodge were held. Military enlistment was high and Lodge attendance was low.  The war left the women, children, and elderly at home, vulnerable, and in need.  The community needed help and the Grand Lodge and Joppa members stepped up.

In 1946, the end of the war marked a progressive period of growth and prosperity with a revival in Freemasonry. Returning veterans brought newcomers and encouraged new members to join the Craft.  As the climbing of a ladder was not ideal for larger gatherings, the Lodge purchased a building from an unnamed political party. The second home of Joppa Lodge was on the second floor of Gelataria Italia, accessed by a walk-in entrance at the rear of the building. 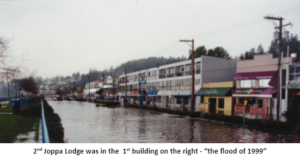 In 1950, the Joppa Masons sold the Washington Avenue property, and purchased property at 15302 Pacific Avenue, where they constructed the current lodge.  Today, the Masonic Hall is home to Joppa Lodge No. 112, St. James Lodge No. 80, Electra Chapter No. 2 Order of the Eastern Star, and the Bethel of Jobs Daughters #20.

The Masons continue to support the community by providing facilities and support for the White Rock Symphony Orchestra, Alcoholics Anonymous, the Cancer Car, bursaries for post-secondary students, the Food Bank, Remembrance Day wreaths, and assisting families in need.

On March 9, 1915, the first minutes of the Lodge known as St. Andrews, “instituted under Dispensation”, recorded that 74 of our original 98 petitioners, met in the Freemasons Hall, at 692 Seymour Street, Vancouver, B.C.  Prior to being Consecrated on June 29th, it was discovered that a St. Andrews Lodge, No. 49, already existed in Victoria. We, therefore, became St. James Lodge No. 80, taking a portion of the name of Robbie Burns’ Mother Lodge of St. James-Kilwinning No. 135, in Tarbolton, Ayrshire, Scotland.

From 1915 through to 1929, the Lodge membership generally grew with many Affiliates and new members. With the advent of the Great Depression in the 1930’s, and for the next 10 years, our membership was in decline.  Following the Depression, during the period of WWII, many of our Brethren enlisted and went overseas.

At the beginning of the 1950’s, our Lodge, once again, experienced a membership increase.  In 1968, the Lodge moved to temporary premises on Dunbar, and in 1971, moved again, to the Grandview Temple.  After three years at Grandview,  St. James Lodge moved to the newly completed Vancouver Masonic Temple on West 8th in Vancouver in 1974.

The decade of the 1970’s, once again, brought St. James Lodge to the brink of extinction. The decline in both attendance and new applicants, which began in the 1960’s, continued unabated.  In March, 1977, it was resolved to surrender our Charter. Grand Lodge worked towards a solution, with the Past Grand Master, Most Worshipful Brother Nick Mussallem, and Brother Ross McLean, the Shrine Potentate, meeting with Lodge Brethren.  The Suspension of the Charter was, thus, canceled.  A number of senior DeMolay Members, already members of other Lodges, approached Brother Ross Mclean as they were looking for an existing Lodge they could transfer to. On December 20, 1977, thirteen Senior DeMolay members Affiliated with St. James Lodge No. 80.

The decade of the 1980’s culminated with our Diamond Jubilee, and began with one of the newly Affiliated Senior DeMolay members being Installed as Worshipful Master. Unfortunately, near the end of the decade, the Membership attendance again started to decline.  Membership continued to decline into the 1990’s. A decision was made to relocate to the suburbs, as most of the attending Members lived there. The decision was made to move the Lodge to White Rock, and the existing Joppa Lodge building. The first meeting in our new and final home was held on February 5, 1991.  On June 29, 2015, St. James Lodge celebrated its 100th Anniversary.  On September 15, 2015, the Lodge was re-dedicated, included in the re-dedication was the Installation of the Officers by the Grand Master, Most Worshipful Brother Douglas C. Collins and his Grand Line.