A long and Historical Road to this building

The building you are standing in front of is the present manifestation of four Lodges, Park Lodge, Maple Leaf Lodge and Mt. Lebanon Lodge.  These three joined to form Heritage Lodge No. 63 in two mergers in 2004 and 2015, the fourth being Burnaby Lodge No. 150.  The original Lodge and namesake of this building, Park Lodge, was formed in Burnaby in 1912 through efforts of two Freemasons named Burke and Burnaby who the street and City are named after.  They built a lodge building near central park in Burnaby which was destroyed by fire in 1924. It was rebuilt and used until 1974 when it was sold to the BC Telephone Company whose chairman was also a Freemason.

Leadership and growth from this Building

The building you see in front of you was constructed in 1978 and first used by Freemasons in 1979. Individual members, past and present, as well as the Lodges themselves, have made great contributions to community, society and Freemasonry.  Many great community leaders have come out of these Lodges (even a Vancouver Canucks goalie!) and many present-day Lodges can trace their roots back to sponsorship from the original Lodges that make up this important location for Freemasonry in BC & Yukon. You can learn more about these lodges, their formation and contributions further down the page. 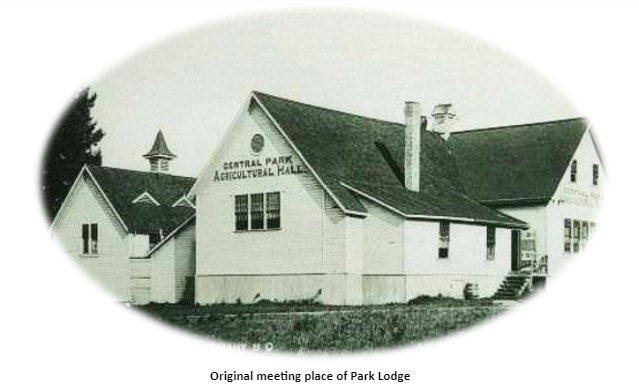 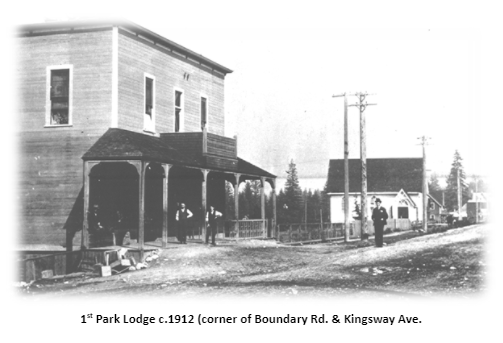 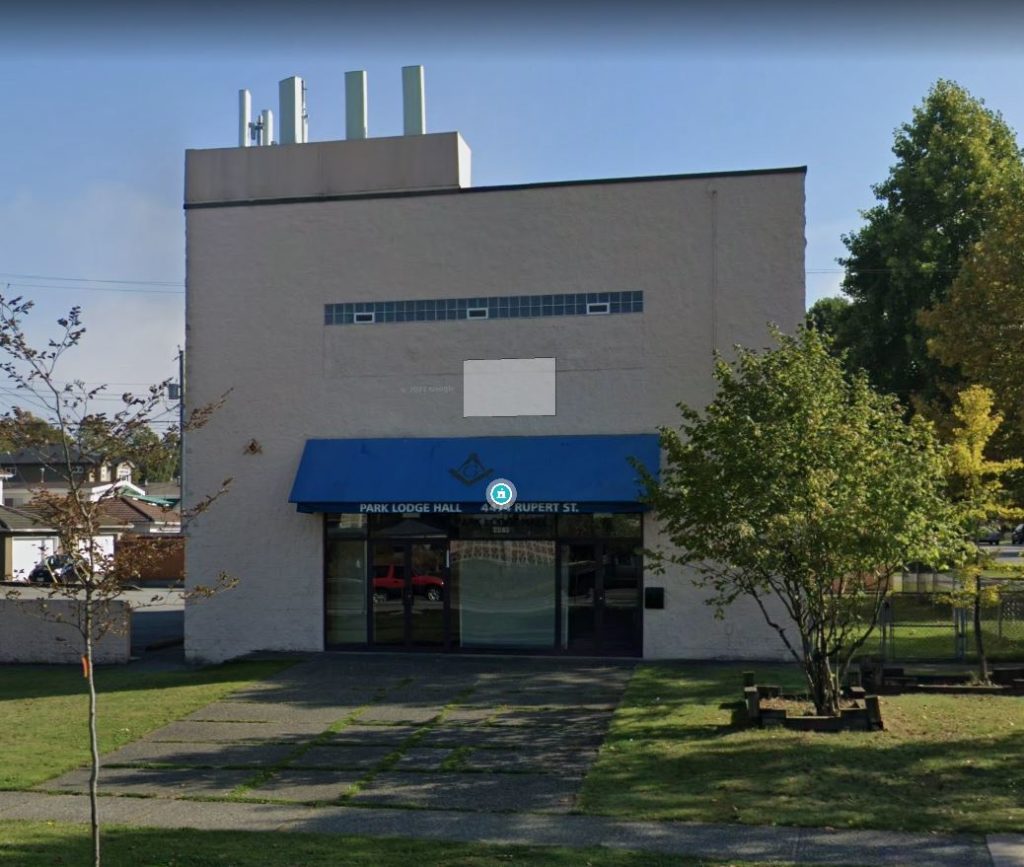 In the spring of 1951, it was suggested by Worshipful Brother W. Morrow of Park Lodge No. 63, that since the Lodge had outgrown itself, another Lodge be instituted. In conjunction with Vancouver Lodge No. 68, a meeting was called in September 1951.  A second meeting took place on October 18, at which time Worshipful Brother E. Beaver of Southern Cross Lodge No. 44, joined in.  He had the desire that another Lodge exemplifying Australian Ritual would be created, and pressed for a Lodge in this work.  On making the required investigation with Grand Lodge, it was learned that no new Lodges exemplifying Australian Work could be instituted in B.C.  All new Lodges were to emulate the Canadian, American (Ancient) or English Emulation Ritual.

Another Meeting was called in November, 1951, when several Past Masters of Park Lodge were present.  It was decided that since many Brethren living in the vicinity of Park Lodge were familiar with Canadian Work, and especially Brethren who had come to this area from the Prairies, the new Lodge would be instituted in the Canadian Ritual.

Right Worshipful Brother D.A. MacMillan, who had affiliated with Park Lodge from Saskatoon, was instrumental in rallying support, and on February 14, 1952, another meeting was called under the chairmanship of Worshipful Brother R.C.M. Robertson, of Lewis Lodge No. 57.  A number of Lodge names were considered including Burnaby Lodge, Hiram Lodge, and Advance Lodge.  After much debate, the name “Burnaby Lodge “ was adopted in honour of Robert Burnaby, a Past Grand Master during the consolidation of Freemasonry in British Columbia

The Lodge would meet on the 2nd and 4th Thursdays of each month, and the venue was decided to be the old Park Lodge Hall on the corner of Kingsway and Burnaby Street, where the current Telus executive offices are now located.

A petition was prepared and the first meeting of Burnaby Lodge was held on April 17, 1952, when each of the 39 Founding Members signed the Application of Institution, depositing $25 each to open a bank account for the Lodge.

The Officers for the new Burnaby lodge were determined, with Worshipful Brother Robertson being elected as the Founding Master.  On June 26, 1952, the District Deputy Grand Master, Right Worshipful Brother J.S. Jones, visited the Lodge, at which time the Entered Apprentice Degree was emulated.  He complimented the Worshipful Master and the appointed Officers on the quality of the work.  The dues of the Lodge were set at $12.00, with Fees for the Three Degrees $125 to include $10.00 for the Grand Lodge Benevolent Fund.

Emblems of Mortality which were found on the beach at Kitsilano, were presented to the Lodge by Brother H.B. Swadden, and several Brethren presented the Casket, 3 Ballot Boxes, and Skirret.  Empire Lodge No. 85 presented the Lodge with the Regalia, formerly used by that Lodge.

On Aug 12, 1952, Grand Lodge advised the Members that the Petition to establish Burnaby Lodge had been favourably received, and on Thursday Aug 28, 1952, the institution of Burnaby Lodge was established.  The ceremony for the granting of a Dispensation to Burnaby Lodge was attended by the Grand Master, Most Worshipful Brother Lawrence Healy, accompanied by a number of Members of the Grand Lodge.

On July 24, 1953, at Freemason’s Hall in New Westminster, Burnaby Lodge was dedicated and constituted No. 150 in the Grand Registry of B.C. by Most Worshipful Brother W.A. Curran, Grand Master.

The initial steps for the creation of Park Lodge No. 63 began over a century ago in the rural Central Park area of Burnaby.  The City of Burnaby is named after Most Worshipful Brother Robert Burnaby, Past Grand Master, who was instrumental in the founding of the Grand Lodge of British Columbia and Yukon.

Brother William W. Burke, for whom Burke Street in Burnaby is named after, initiated a meeting which was held in the Central Park Agricultural Hall on April 18, 1911, to discuss the question of the formation of a Lodge at Central Park. The name of Park Lodge was adopted because of its proximity to Central Park.

On July 4, 1911, permission was sought from Francis J. Burd, then Grand Master of the Grand Lodge of British Columbia, and was granted on September 11, 1911. 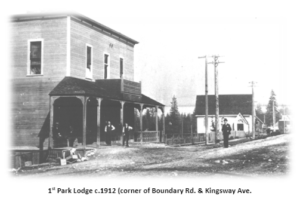 On September 14, 1914, the Lodge moved to more convenient premises at Park Avenue and Kingsway.

October 13, 1924, shortly after 1:00 a.m., a disastrous fire destroyed the Lodge Hall and all its contents including all Lodge records and furnishings, with the exception of a minute book and the square and compasses which were found among the ashes.

In June 1925, the Lodge moved to their newly rebuilt premises, and remained at this location until 1974 when the property was sold.

Meanwhile, Worshipful Brother M. R. Wells and a number of Brethren from Acacia Lodge No. 22 who were residents in the Eburne and Point Grey areas, saw a need for a Lodge in the Eburne area, now Marpole and the North East area of Sea Island, now the site of the Vancouver International Airport areas.

In the early fall of 1912, they considered the formation of a Masonic Lodge in that district. On December 26, of 1912, a petition for dispensation to form a Lodge was presented to the Grand Master John M. Rudd and on May 26, 1913, he issued a dispensation to form the Lodge to be known as Mount Lebanon Lodge U.D. 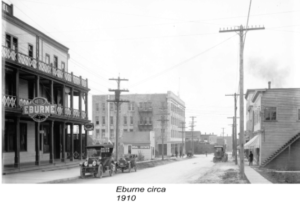 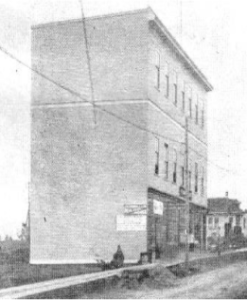