A CENTRE FOR FREEMASONRY.

The Vancouver Masonic Centre has been the Lower Mainland’s largest and most utilized Masonic building since the early 1970s.  It has recently undergone a rebirth and has been redeveloped into what will surely be recognized as one of North America’s premier modern Masonic facilities. This legacy project, which includes 150 units of rental housing and large banquet facilities is also home to the offices of the Grand Lodge of B.C. & Yukon and its Museum and Archives. Additionally, there are meeting rooms for Lodge and business meetings and a club space for social events.

As you stand here you will note two features which speak to the importance of architecture and geometry in our fraternal organization, formally tracing its history to the late 1600s where the first Lodges in Scotland and England can be found. Along the eastern edge of the property the Five Orders of Architecture are symbolized by the five different pillars lining the walkway. To the left of the doors on 8th Avenue sits a representation in stone of the 47th Proposition, found in Euclid’s Elements, Book 1, also known as the Pythagorean Theorem.

AN INVESTMENT IN THE FUTURE

The building itself makes a statement about the confidence the Directors of the Vancouver Masonic Centre have in the future of Freemasonry in the Lower Mainland and this Grand Jurisdiction, and is only the most recent iteration of a long line of Masonic Temples that have dotted Vancouver for over a century. You can learn more about the Lodges and Concordant bodies that use this centre further down the page or pay us a visit.

The previous Masonic Centre was completed in 1974, with the cornerstone laying in September 1984. The building was demolished in 2018 to make way for the new Vancouver Masonic Centre. 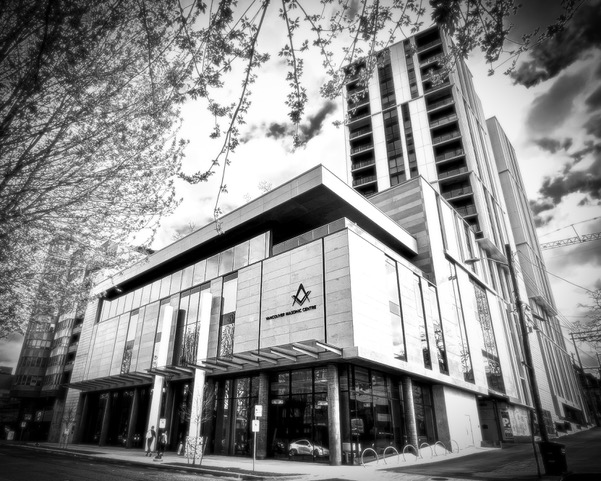 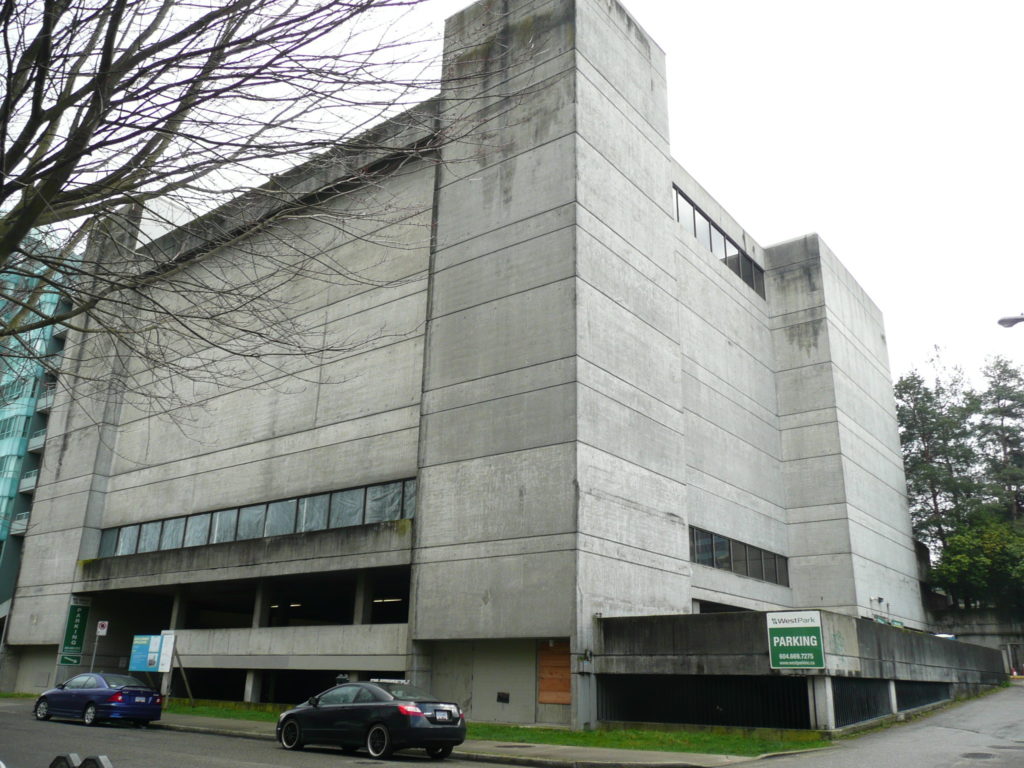 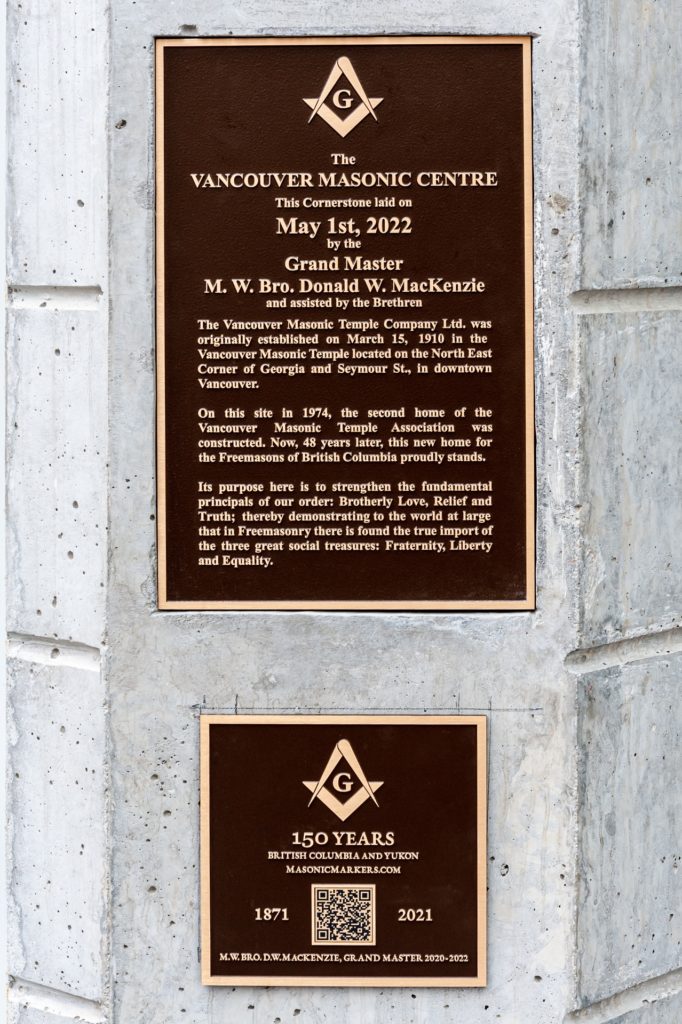 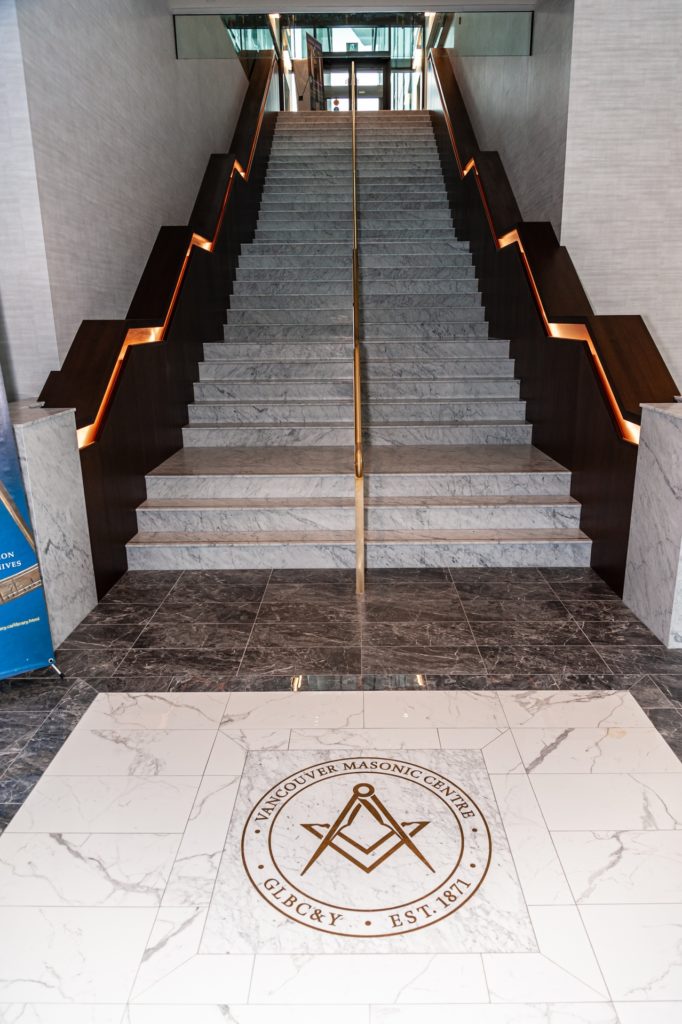 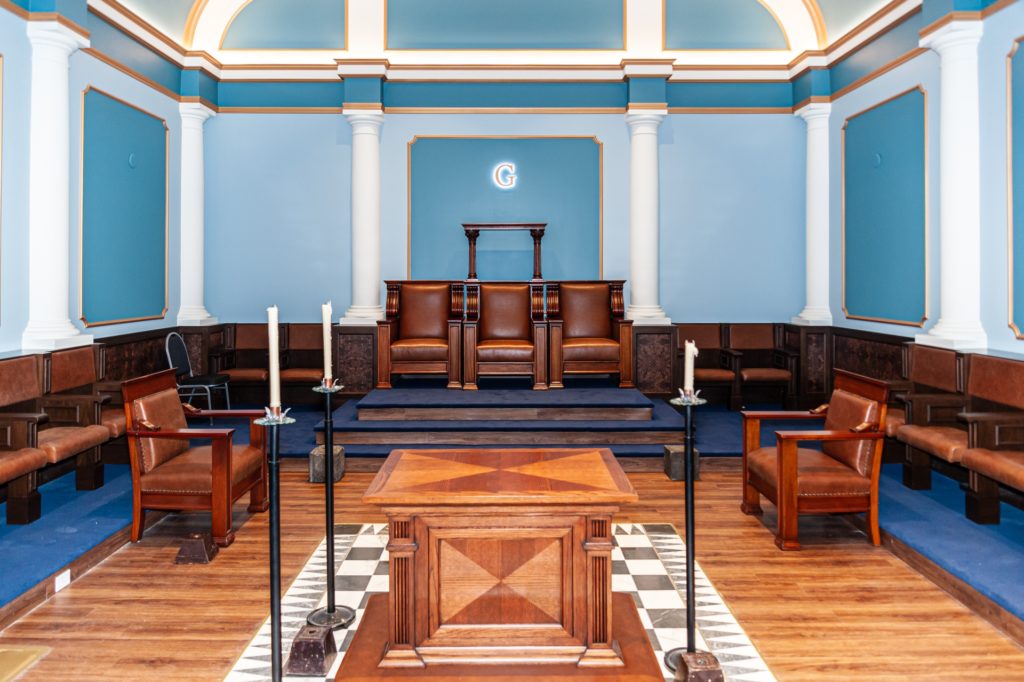 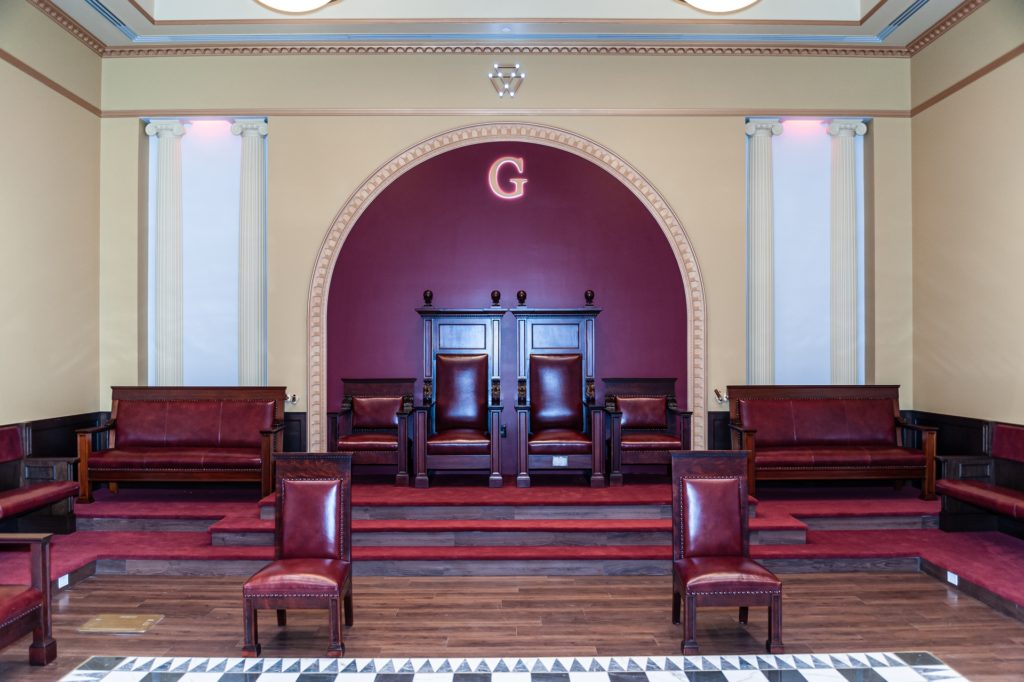 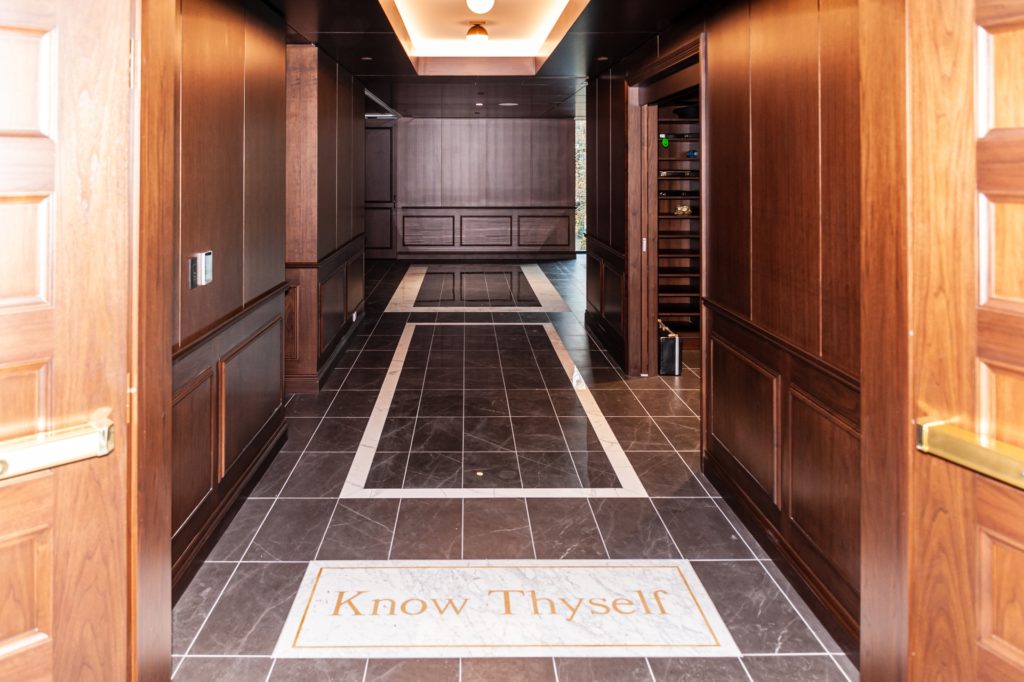 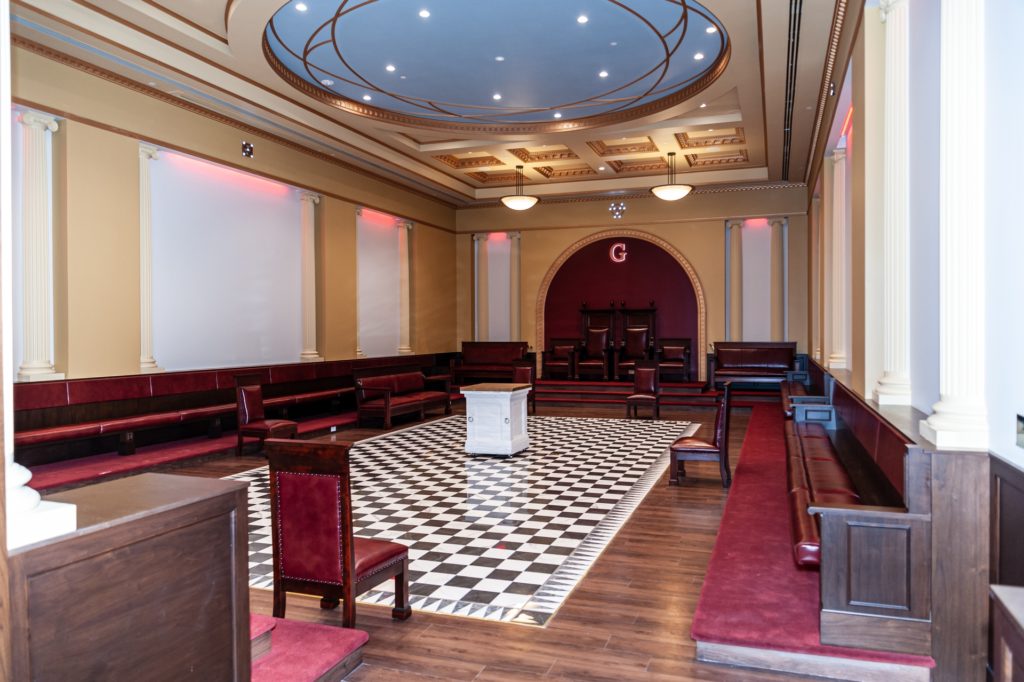 Since the 1860s, before the City of Vancouver had been incorporated, before the terminus of the CP Rail had been decided, Freemasons met in a number of different buildings which dotted the Burrard Inlet. Some of these buildings still stand today, such as the Springer–Van Bramer Building in Gastown. As Freemasonry flourished in the first decades of the 20th century, the Vancouver Masonic Temple Association (VMTA) formally constituted itself in 1934. After WW2, membership in Masonic Lodges grew rapidly as men returning from war sought to maintain fraternal bonds in civilian life. During the 15-year period of 1947 and 1962, the average initiation throughout the province rose to 1,106 per year and Lodges increased from a total of 118 in BC & Yukon to 163. That was an increase of 16,593 members and an increase of 45 Lodges. Either enhancements to existing facilities would be needed, or a new building built to accommodate such growth. At its Annual General Meeting in December 1966, VMTA President George Derby opened the discussion of looking to renovate the Masonic Temple which at that time stood at the corner of Georgia Street and Seymour Street, by adding a new elevator and air conditioning.

A year later, however, at the 1967 Annual General Meeting, a second proposal, or Plan ‘B’ was presented. An outside development group came with an offer to lease the lot for 50 years to develop a 15-story building and let the Masons rent back the 2nd & 3rd floors (and the basement) for their Masonic endeavours. When looking at both financial options, it was decided that Plan B, the long-term lease, made more financial sense. This original plan would have kept the Lodges on the downtown peninsula, but it did not proceed. Nonetheless, Lodges had already left the building in anticipation of redevelopment and a new solution was needed. In 1971, the lot at 8th Avenue & Granville Street where the Vancouver Masonic Centre (VMC) stands today was acquired for $107,000. When the building was completed in 1974, the total construction cost was just shy of $840,000, a fraction of what today’s building cost to build.

The VMC was successful and happy for many years, but as membership declined and Lodges turned in their Charters, the costs of property taxes and lots of maintenance on a 40-year-old building brought the question of financial sustainability of the building into view. Beginning around 2012 the directors of the time realized something needed to be done. Fortunately, with the help of Colliers International, the VMC Directors were able to forge a deal with BC Housing to fund a bold vision for redevelopment of the site which was eventually finished in early 2022. Today the building is home to several Lodges and Appendant Bodies which enjoy one of North America’s premier Masonic facilities. In addition, it houses the Library, Archives and Offices of the Grand Lodge of British Columbia & Yukon, a ballroom and banquet facility, and over 150 neighbours, who live in the tower overlooking the city and its beautiful natural surroundings.

The coming of the Canadian Pacific Railway to the west coast of British Columbia resulted in a huge population boom around Granville, a tiny mill town on the south shore of Burrard Inlet. It became the incorporated City of Vancouver on April 6, 1886.

Among the swarms of new settlers were Freemasons from Ontario and Manitoba, some of whom worked for the railway. They visited Mt. Hermon Lodge, which had moved across the inlet, from Moodyville, to Vancouver that year. But Mt. Hermon Lodge used the American Masonic ritual which were unfamiliar to the newcomers. Some decided they should form a lodge with ritual that they knew. A number of them met at the office of realtor James Welton Horne on April 25, 1888, and resolved to request a dispensation from the Grand Master to meet formally as Cascade Lodge, the name being taken from one of the Canadian Pacific Railway’s Divisions. 35 Master Masons signed the application. Grand Master A.R. Milne signed the dispensation on May 11, 1988, and a warrant as Number 12 was approved by Grand Lodge on June 25, 1888.

The first Worshipful Master was William Downey, the Irish-born Assistant Superintendent of the railway. He was later Grand Master for British Columbia. The first Senior Warden was J.W. Horne, founder of the towns of Brandon, Manitoba and Mission. The first Junior Warden was Lacey R. Johnson, Master Mechanic for the Canadian Pacific Railway who also became Grand Master.

Not only did the early members of Cascade build a Lodge, they helped build a city. Mayors David Oppenheimer, Fred Cope, Henry Collins, James F. Garden, Thomas O. Townley, Fred Buscombe and Charles Tisdall were all members of Cascade; Tisdall was later a Grand Master.

Among the founding members were Henry J. Cambie (Cambie Street), William Salsbury (Salsbury Drive) and Donald B. Charleson, who gave his name to Charleson Park along False Creek. Cascade originally met at a hall on Cordova Street owned by a member, Harry Arkell. It moved in 1889 to a new hall still standing on the northwest corner of Cordova Street and Cambie Street, then rented another building at Hastings Street and Granville Street from 1898 to 1910. At this point, a new building for Masons only was opened at 692 Seymour Street at Georgia Street, with Cascade being one of the prominent financiers of the project. The Lodge remained there until the building was closed in 1969, taking up residency at the new Masonic Temple at 1495 West 8th Avenue in 1973 until it was closed in 2017. The Lodge was forced to temporarily move next door to the Oddfellows Hall until the West 7th Avenue Centre opened in 2022.

University Lodge No. 91 was originally Instituted and Constituted in Point Grey not, then, in the City of Vancouver. Our Lodge presented its petition to Grand Lodge, together with six other Lodges, shortly after the close of World War 1  University Lodge received its dispensation from the Grand Master, Most Worshipful Brother Samuel J. Willis on February 27, 1920. Membership at that time was 27.

Our Lodge was granted its Charter at the Annual Communication of Grand Lodge on June 17, 1920 and was given its present number of 91.  University Lodge No. 91 was constituted by Most Worshipful Brother Willis on August 4, 1920.  Our Lodge adopted the “Ancient” or “American” ritual for its Work.  It is generally agreed that University Lodge obtained its original form of ritual from Ashlar Lodge No. 3 in Nanaimo.  This ritual is still followed today.

University Lodge originally met at its own hall at 4426 West 10th Avenue.  In June 1975, the building was sold and we moved to the Vancouver Masonic Centre at 1495 West 8th Avenue.  Our first meeting was held there on Monday, September 8, 1975, in the Ditmars Room with the Worshipful Master, Worshipful Brother John D. S. Phipps presiding.  Due to the redevelopment of the VMC between 2018 and 2022, we met in the Odd Fellows Hall, 1443 West 8th Avenue and returned to the VMC in early 2022.

The Tenets of Freemasonry are Brotherly Love, Relief, and Truth.  We believe that this extends to all people.  To relieve the distressed is incumbent on every Mason.  To this end, University Lodge financially supports organizations that provide assistance to people in need, through annual donations to the Salvation Army and Union Gospel Mission, and by selecting a specific charity on an annual basis, such as meal boxes for school children and local food banks.