1950’s Richmond was growing, and with a population approaching 25,000, and many local dedicated Freemasons, a petition was sent to the Grand Lodge of BC & Yukon to form a new Lodge in the city.  On August 8, 1950, Richmond Lodge No. 142 was instituted in the Loyal Orange Hall while the building you are standing in front of was being constructed.  The original building was much more prominent from the street but only half the size of the present structure. Richmond, being the bustling commercial hub it is, has had many of its important businesses as tenants on the ground floor of this Masonic Temple starting with the Royal Bank in the 1950’s and now two businesses occupy the frontage.

A hub of Masonic activity

Richmond Lodge No. 142 is the group of Freemasons who own and manage the Richmond Masonic Temple Society.  Pythagoras Lodge No. 194 surrendered its constitution in 2014 and joined Richmond Lodge No. 142.  Both of these Lodges practised Ancient work so the amalgamation was relatively smooth.  Centennial-King George Lodge No. 171 and Aviation Lodge No. 175 also meet at this Temple as well as Simon Fraser Royal Arch Chapter No. 40, a concordant body of Freemasonry. You can learn more about the history of these Lodges and concordant bodies below. 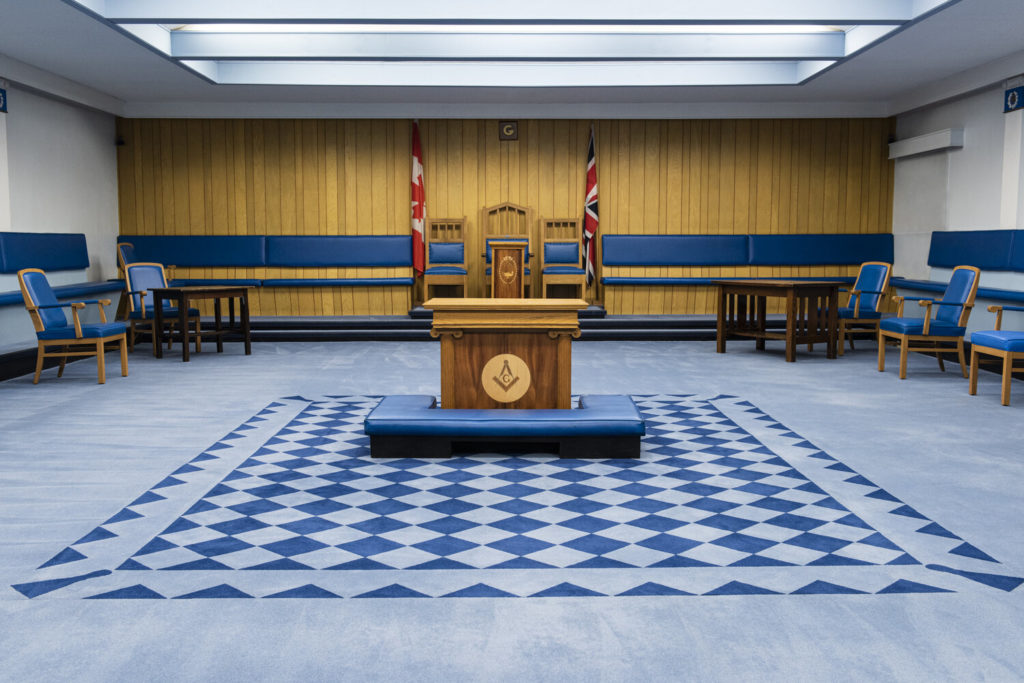 Aviation Lodge No. 175 was formed by a group of Brethren who were all involved in the aviation industry in one area or another with the understanding that, due to the demands of their working environment, not all Brethren would be able to attend to their Masonic duties 100% of the time.  In other words the length of their cable tow would be somewhat flexible.

The Lodge was instituted on May 11, 1960, with 73 founding members present. It was constituted on September 13, 1961, by the Grand Master, Most Worshipful Brother James R Mitchell. Between Institution and Constitution a number of Brethren were initiated, passed and raised.

In the intervening years, Aviation Lodge has thrived under the guidance of those founding Brethren and the guide lines they laid down for us which are still used by the current officers of the Lodge.  The Lodge reached its peak in membership in the 1980's with about 160 members and then like the rest of our organization, suffered dramatic reductions in membership.  They are now back to about the same number as when the Lodge was founded.  Not all Brethren are connected to the aviation industry, but they all fly! The Lodge meets on the first and third Mondays of the month.

The founding members of King George Lodge were all servicemen, and the founding master, Right Worshipful Brother H.R. Freeman-Smith (no one ever called him Harold) was known at the time for organizing banquets at the Hotel Vancouver to honour the Freemasons serving on naval vessels that visited the Port of Vancouver.  At that time, the Lodge was in District 16 and met at the Grand Lodge building on Seymour Street in Vancouver. The last meeting held there before relocating to the Marpole Hall on Granville Street was for the installation of Right Worshipful Brother Charles M. Holden as Worshipful Master.

Many of the founding members of Centennial Lodge were members of Kilwinning Lodge No. 59, also meeting at Seymour Street.  Establishing their own Lodge closer to where they lived in Richmond, the name was chosen to commemorate the centenary of the founding of the colony of British Columbia. Assigned to District 20, their crab dinners achieved some fame in the early sixties.

The Lodge’s history was a family affair with one early member being a sixth generation Freemason. There were several periods when there were three generations of one family in the Lodge and many sons have followed their fathers into the lodge.

The Lodge’s history is recorded in its artifacts.  Its altar cloth contains one of only two extant samples of the British Columbia Centennial Tartan, created for the 1958 centenary of the colony—the other residing with its sister lodge, Centennial Lodge No. 25 in Snohomish Washington.  Centennial is the only Lodge in this jurisdiction, and one of only a handful in the world, to now have its own registered tartan. The doorknocker was donated to Centennial Lodge by Right Worshipful Brother Holden, little knowing that two decades later he would be secretary of the consolidated Lodge.  A dinner gong, presented to King George Lodge by its sister Lodge, Service Lodge No. 255, in Seattle, came from a Boston streetcar; its base was made from wood recovered from the US Battleship “Iroquois”. Another prized possession on display is a Masonic apron, hand-painted in Russia in 1840 and donated to the lodge in 1999 by Worshipful Brother “Ronnie” A. Murray, a founding member of Centennial Lodge, and the original owner’s great grandson.

The year 2022 marks the 75th anniversary of King George Lodge and the 35th anniversary of the consolidated Lodge. Using the BC Canadian working, the lodge meets on the first Tuesday of the month in the Richmond Lodge hall.

After many years under consideration, a concerted effort was made in early 1950, to pursue the establishment of a Lodge in Richmond.  With a population approaching 25,000 and an enthusiastic number of interested gentlemen, it fell upon the guidance of a resident, Most Worshipful Brother W.R. Simpson, then Grand Secretary of the Grand Lodge of British Columbia, to initiate the undertaking.

Under the leadership of Worshipful Brother Clement W Hudson, a Past Master of Acacia Lodge No. 22, a meeting of 37 Masons was held on June 3, 1950, at St Albans Hall.  Leading from this meeting, financial support was pledged, and an appropriate number of suitably qualified volunteers undertook to act as Officers of the fledgling Lodge. Subsequently a Petition for Dispensation was circulated and signed by 64 Masons, many of them resident in the district.  On August 2, 1950, these Brethren met at the Loyal Orange Hall on Steveston Highway in Richmond. It was decided that the Lodge be named “Richmond Lodge” and that the Ancient Ritual would be adopted. Provisional Officers were elected.

On August 9, 1950, in the Loyal Orange Hall, Steveston Highway, Richmond Lodge was instituted. The ceremony of Institution was conducted by the Grand Master, Most Worshipful Brother J.H.N. Morgan, assisted by Grand Lodge Officers and many distinguished Brethren, including the following:

At the Annual Communication of Grand Lodge in June 1951, a Warrant was granted to Richmond Lodge, and on July 18, 1951, the ceremony of Constitution and Consecration was held. The ceremony was conducted by Most Worshipful Brother J. Murray Mitchell, then Grand Master of British Columbia.

The Volume of The Sacred Law, accorded the place of honour at the Annual Installation of Officers, is the Hudson family Bible, presented to the Lodge by Worshipful Brother C.W. Hudson, first Worshipful Master of Richmond Lodge.