This historical building was constructed in 1931 for the Freemasons of Prince David Lodge No. 101. It was designed by the same architectural firm that built the Vancouver Marine building. The Cornerstone was laid on February 23, 1931, and the Lodge furniture was made from local beech wood.  Shortly after its 45th birthday, it mysteriously moved (via flat deck) from its original location on 225th Street at Lougheed Highway to its present location at 222nd Street and 116th Avenue.  A mural in the Maple Ridge Museum shows the building in its original location.

Initial discussions on the formation of a Lodge in Maple Ridge were facilitated by cooperation between the local Anglican priest and local Freemasons who instituted their new Lodge in 1922 in the Oddfellows building in Haney. Two Lodges use this Temple as a meeting place,  the namesake Prince David No. 101 and Landmark Lodge No. 128.  You can learn more about both Lodges further down this page.

The Maple Ridge Hospital and the Food Bank are regular recipients of donations and fundraising by the Freemasons of Prince David Lodge. High school graduates going on to tertiary studies also receive bursaries, including students from Garibaldi, Maple Ridge and Pitt Meadows secondary schools. 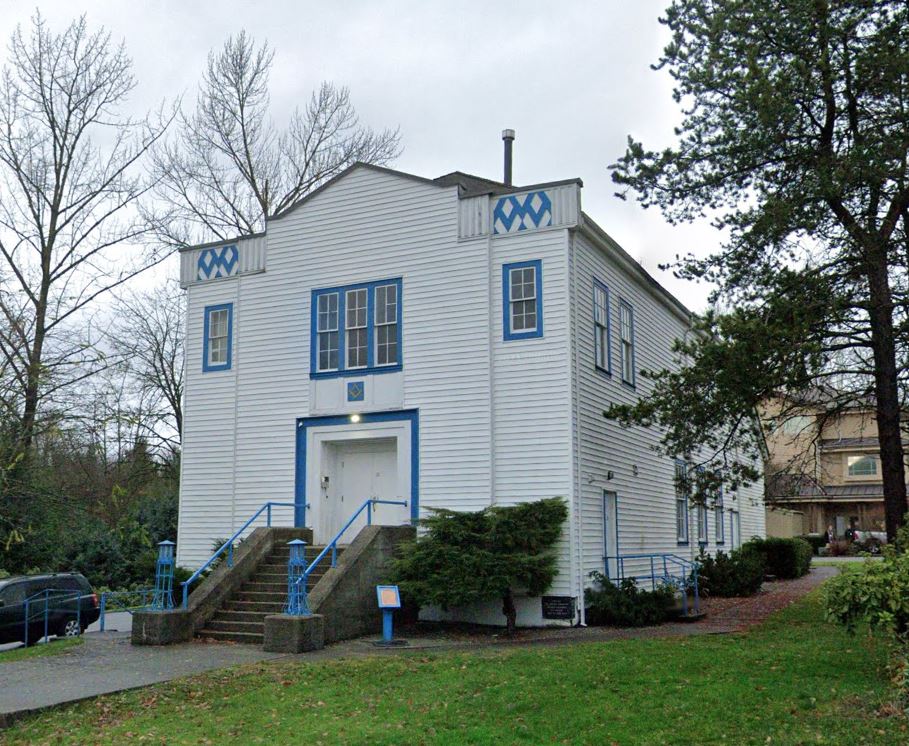 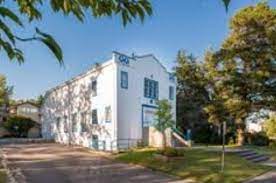 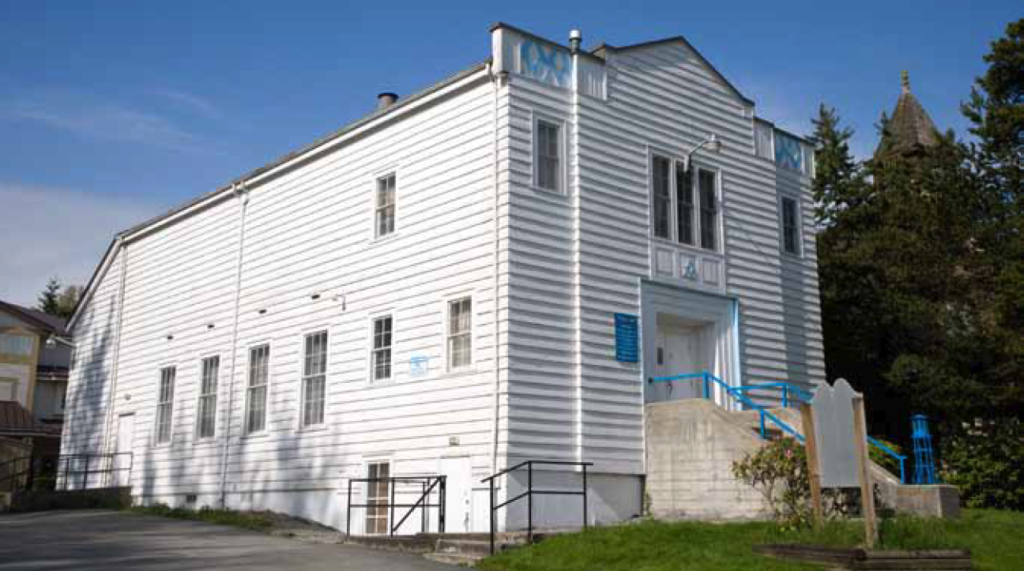 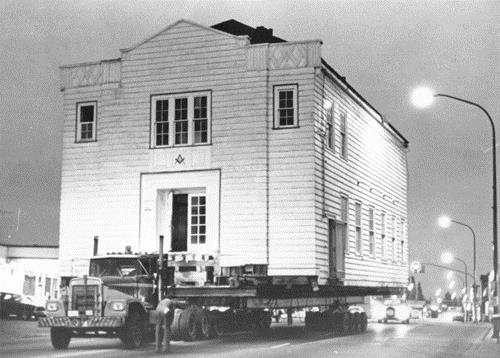 Landmark Lodge No. 128 was the first post WWII Masonic Lodge to be instituted and constituted in this jurisdiction.

A large group of Past Masters and Past Grand Lodge Officers came together with the knowledge that a significant number of Brethren, who practised the Canadian Work, had moved from Ontario, Quebec, and the east coast of Canada. They lived or worked near University Lodge No. 91 in Vancouver, but had no place to practice their craft using the ritual in which they had been obligated. The Brethren refused to affiliate with Lodges that practised other rituals, but they needed a local sponsor that would support a Lodge which used the Canadian Ritual. University Lodge No. 91 was approached. It had room in its Lodge building and, thankfully, its Brethren were willing to lend their support in forming a new Lodge.

Landmark Lodge No. 128 was thus formed.  The name chosen was considered fitting, given the history of the area and the famous explorers who had once visited this part of North America.  The petition for a new Lodge was submitted to the Grand Lodge of British Columbia, and Landmark Lodge was instituted as Lodge No. 128 on the Grand Registry of this jurisdiction on April 26, 1946. The Lodge was then constituted on September 21, 1946.

During the period of its formation, the Lodge wanted an emblem to represent it that was unique, and which represented many of the principles of Freemasonry, including enlightenment, philosophical meaning, contemplation of moral values and worth, and the goal of improving themselves and their Brethren by advancing society.  A monument, located on Northwest Marine Drive at the University of British Columbia, was chosen as that symbol because it honoured the meeting of Captain George Vancouver and the Spanish explorers Dionisio Alcalà Galiano and Cayetano Valdés. These three men were explorers and cartographers who, though nominally enemies because of their respective nationalities, worked together to further exploration around what would eventually become Vancouver Island.

A plaque on the monument reads: “Past conflicts were forgotten, mutual confidence established, and they agreed to continue their exploration together for the common good." The emblem seemed fitting for a new Lodge setting out on a great adventure.

This year we welcome the 150th Anniversary of our Grand Lodge in this jurisdiction by also sharing Landmark No. 128’s 75th Anniversary.  Landmark Lodge is now located here, at 22272 116 Ave, Maple Ridge BC, but that’s another story. We meet the 1st and 3rd Thursdays of the month, except July and August of each year. Meeting time is 7:30 p.m.  We welcome all good men with the hope of helping them become better people in society through brotherly love, relief and truth.

On September 3, 1923, a meeting of the members of Prince David Lodge was held in the Masonic Temple, New Westminster, for the purpose of Constituting and Consecrating the Lodge and Installing the Officers.  After performing the regular ceremonies of granting a Warrant to operate as a new Lodge, The Most Worshipful Grand Master Most Worshipful Brother C.E. Tisdall, declared Prince David Lodge No.101 formed into a Lodge of Ancient Free and Accepted Masons.

Prince David Lodge building was designed by the Vancouver architectural firm of McCarter & Nairns, designers of the Vancouver Marine Building. A contract was awarded to Brother Dugald Brown on February 5, 1931, to build the new Masonic Temple.  The cornerstone was laid on February 23, 1931, seven years after the Lodge was consecrated.   The Lodge was then declared open on June 15, 1931, for Masonic purposes.  Wood from local beech trees supplied by Worshipful Brother W.F. Mackenzie was dried by Brother C. Phelan and made into lodge furniture by Brother John Whiteman.

After fifty-seven years in the same location near 225th Street on the Lougheed Highway, the building was moved on July 16, 1980, by a large flat deck truck to its present location on 116th Avenue. Re-dedication took place on September 13, 1980. Grand Master, Most Worshipful Brother Ted Clarke, along with other Grand Lodge Officers and members of Prince David Lodge, re-laid the original cornerstone.  The ceremony was attended by representatives of the Maple Ridge Legion, the Legion pipe band who led the parade, members of the Municipal Council and local School Board, along with over 200 members of the public.  The official spokesman was Worshipful Brother Tom Hodgson.  Some other notable members were Brother George Mussallem, former politician and M.L.A. for 4 years.  He was awarded Freeman of the City of Maple Ridge and Mission in 1983.  Right Worshipful Brother James Hadgkiss, former owner of the Haney Brick and Tile Works, Most Worshipful Grand Master Nicholas Mussallem, a Provincial Court Judge, who was Grand Master in 1970-71, Reeve of Maple Ridge Municipal Council and member of Western Gate Lodge No. 48.

September 22, 1973, marked the 50th anniversary with official celebrations to mark the occasion being held in the Lodge banquet room.  A toast was proposed by Brother William Kellock, Senior Deacon, to the Grand Master Most Worshipful Brother Wilfred H. Roger. Also in attendance were Worshipful Master Neil McCuish and Past Master Brother I.J.V. Stephan.

Celebrations for the 75th anniversary were held in the Pitt Meadows Heritage Hall in 1998.  Grand Master Most Worshipful Brother Alan Tomlins addressed the audience.  Very Worshipful Brother Wilson Mackenzie presented a history of Prince David Lodge and Worshipful Master Donald W. Mackenzie rounded off the evening with a short speech before calling on Brother George F.W. Cole to make the Tylers Toast. Worshipful Master Donald W. Mackenzie would later become Grand Master of the Grand Lodge of B.C. and Yukon during its 150th. Year Celebrations.