Mountain Lodge No. 11 was originally constituted in 1887, 30km northwest of Golden in the C.P. Rail boomtown of Donald, a little railway town on the Columbia River.  The town was given the name “Donald” in honour of Donald A. Smith, later Lord Strathcona, who made his fortune building railways, most notably the railway that opened the Canadian Northwest to settlement.  When Canadian Pacific relocated its divisional headquarters from Donald to Revelstoke in the late 1800’s, the town was mostly abandoned. Mountain Lodge chose to relocate to Golden rather than Revelstoke, and in 1900 had its first meeting in town above the H.G.Parson store on the north side of Kicking Horse River.

The building here, at 910 10th Avenue, is the fourth location for Mountain Lodge in Golden and was constructed in 1972. The lodge hall is on the second floor and the main level has always been leased by the B.C. Liquor Distribution Branch. The Lodge’s previous building is located immediately to the north of this location and is still retained by the Lodge. It was built in 1932 and the exterior was restored in 2010.

The members of Mountain Lodge along with its fraternal concordant bodies, Mountain Shrine Club and the Order of the Eastern Star, all share a vision and mission of philanthropic responsibility and have supported numerous local and national charitable causes including the Golden & District Hospital, Canadian Cancer society, BC and Southern Alberta Children’s hospitals and Shriners Hospitals for Children. 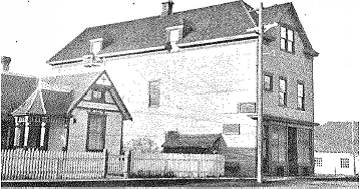 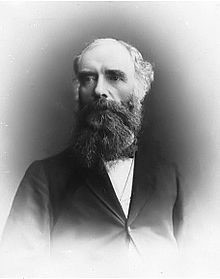 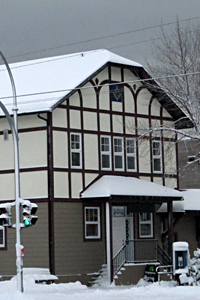 When the Canadian Pacific Railway was being constructed west of the summit of the Rockies, it was first intended to locate the divisional point at the junction of the Kicking Horse River and the Columbia.  This caused a tent town to spring up during the summer of 1884 before the railway reached that point. The settlement was called "Golden City", but it was not the City of Golden of the present time, which was a little further up the river.  On examination, however, it was found that the low level of the land along the river was subject to flood by reason of ice jams in winter.  The cost of building a foundation for a divisional point would be too expensive, and a decision was made to establish it at the first crossing of the Columbia River, about sixteen miles northwest.  This location was christened “Donald”, in honour of Donald A. Smith (eventually Lord Strathcona), who was instrumental in the construction of the C.P. Railway and opening the Canadian Northwest to settlement.

There being a number of Freemasons in Donald, a petition was drawn up for a Masonic Lodge and a dispensation was issued by the Grand Master of the Grand Lodge of British Columbia.  The Lodge was instituted on February 17, 1887, by Worshipful Brother D. W. H. Horlock, a Past Master of Kamloops Lodge No. 10.  The charter to Mountain Lodge No. 11 was granted by Grand Lodge on June 19, 1887, and the Lodge was duly constituted on December 5, 1887.  As almost all of the officers were from Ontario, it was only natural that the Canadian Ritual of that jurisdiction be used.  This introduced a third ritual into the Jurisdiction of British Columbia, where existing Lodges were using ritual from its Scottish and English origins.

When the railway was completed, moving the divisional point to Revelstoke, it spelled the eventual demise of Donald.  There were then about three hundred permanent residents in the town, but the land in the vicinity was of little use for agricultural purposes and the local merchants had to depend wholly on the resident railway employees for business. All the residents left the town, the railway’s employees going to Revelstoke, and the others to the town of Golden, twenty miles south.  The Brethren of the Lodge had also split between the two locations.

At a regular meeting of Mountain Lodge held on December 11, 1899, after a lengthy discussion, it was moved and seconded that “the regular meetings of the Lodge should be held at the Masonic Temple in Revelstoke, instead of at Donald”, but this motion did not pass. Then notice was given that, at the next regular meeting, a motion would be made that the word "Donald" be struck out and the word "Golden" be inserted, in an effort by the Revelstoke area brethren to move the Lodge to their town.

The Brethren of Golden would not have been able to travel to Donald in time to challenge the vote, had it not been for the good fortune of a visiting Brother Killeen from Cascade Lodge, Banff.  He was an assistant roadmaster at Field, B.C., and just happened to be in Golden that afternoon.  He heard of their troubles and gave them the loan of a pump style hand car.  The Brethren pumped the car the twenty miles to Donald, and entered the Lodge in time to give the votes which decided the matter in favour of Golden.  The determination of these Brethren was evident, as they had pumped the car through a temperature of 12 degrees below zero going, and over 20 degrees below zero returning.  Revelstoke Lodge No. 15 had to be satisfied with its original name and number.  Formal permission for the move of Mountain Lodge No. 11 from Donald to Golden was given by the Grand Master on January 11, 1900.

On February 21, 1962, Mountain Lodge No. 11 celebrated its 75th Anniversary in a well-attended banquet at the Big Bend Hotel.  Most Worshipful Brother James Reid Mitchell, Grand Master of the Grand Lodge of British Columbia (and Yukon) attended, and gave an interesting address.  2022 marks the 135th Anniversary of Mountain Lodge.