On May 13, 1925, Freemasons in Langley, who had been meeting above a local commercial premise, made the decision to construct a building of their own on the property where it still stands today.  Two lots on Old Yale Road were purchased and plans made to construct a two story building with a Lodge hall on the second floor and multipurpose banquet hall on the main floor.

The cost of construction was $5000.00 which was covered by selling bonds to the Brethren at $50.00 each.  Other than usual maintenance, no major structural changes were made until 1985, when the size of the building was increased by 30% and included the installation of a commercial kitchen.

The Lodge hall is one of the oldest commercial buildings in Langley City, however has never been designated a historical building.  There are currently over 400 masonic Brethren meeting in the Eureka Lodge Hall, in five Masonic Lodges, Eureka Lodge No. 103, Cloverdale Lodge  No. 168, Langley Lodge No. 184, Dogwood Lodge No. 193, and Westminster Lodge No. 174.

These five Lodges provide community assistance by various donations and the lodge has been made available to numerous community organizations, the local 4H Club, a group of elderly artists, the local group of Alcoholic Anonymous, and the local Order of Eastern Star make cancer dressing for the local Canadian Cancer Society.

This building, in 3 years, will be 100 years old.  It is to be replaced in the near future with a more modern structure, which will hopefully stand for another 100 years. 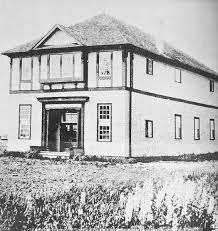 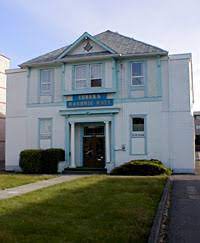 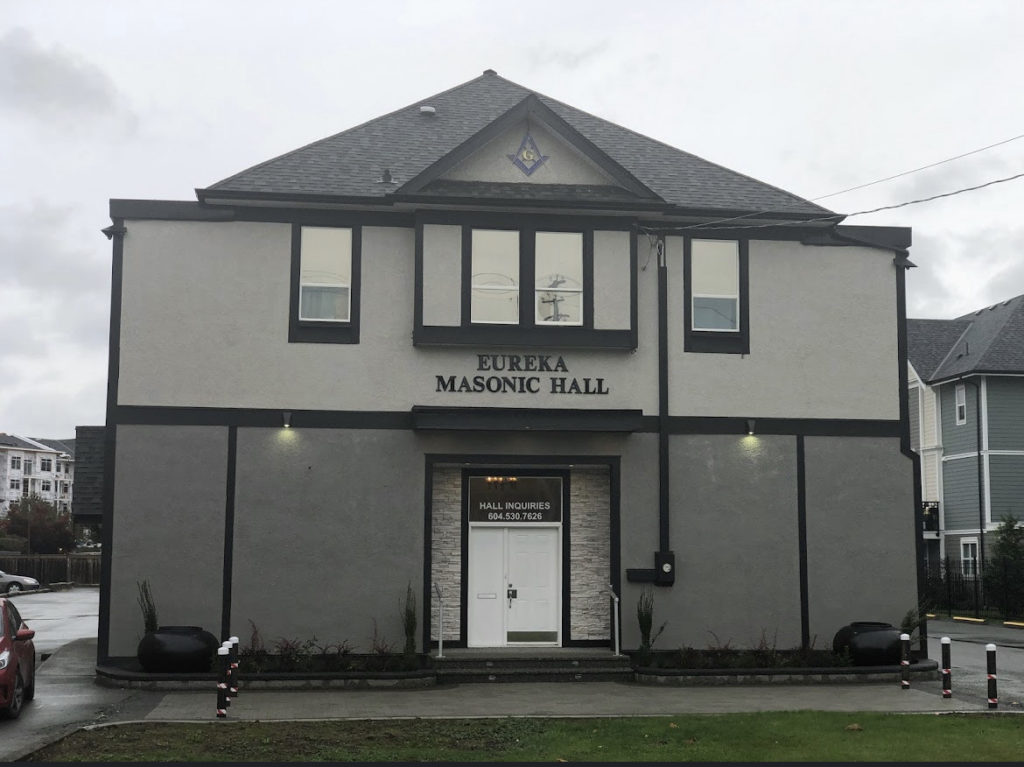 BRIEF HISTORY OF WESTMINSTER LODGE NO. 174

Westminster Lodge was Instituted on February 25, 1960, and held its Ceremony of Constitution and Consecration on September 14, 1961.  The Lodge officers while under Dispensation included:

The Lodge originally met in the Agnes Street Masonic Hall in New Westminster, BC until the year 2000, when it moved to its present location in Langley, BC.

The Lodge name “Westminster” was chosen mostly in reference to Westminster Abbey, but also to recognize the City of New Westminster, BC.  It was numbered 174 on the Registry of the Grand Lodge of British Columbia and Yukon.  In recognition of its history, the Past Master’s Jewel for Westminster Lodge bears a depiction of Westminster Abbey.

The Lodge practices the Canadian Ritual, and meets on the second Thursday of the month, excluding July and August.

Westminster Lodge also has a fraternal relationship with Garfield Lodge in LaConner, Washington.  This provides an opportunity to extend our Masonic relationships into the USA.

In April, 1977, during a regular meeting of Eureka Lodge No. 103, Brother H.D. Stafford proposed that a new Lodge in District 25, using the Emulation Ritual, might be worth considering. Interested Brethren could meet in the OK Tire store in Langley at a specified time and date. Only 3 Brethren attended that first meeting, however, there was sufficient interest to continue moving forward. An advertisement was placed in the Langley Advance newspaper calling interested parties to an informative meeting at the Eureka Hall two weeks later. This meeting attracted twenty-five Brethren and a great deal of attention.

At the subsequent meeting, a decision was made to proceed with the formation of a new Lodge. There were 17 original founding members, each paying dues of $100.00. In the weeks that followed, membership rose to 63. Practice of the new Emulation Ritual began in schoolrooms, small rented halls, private homes and finally, in the Eureka Lodge Hall.  Regalia was obtained from Grand Lodge and Brother George Preston created the working tools and the lecture board case. The remainder of the Lodge furniture was donated by various Brethren.

On August 18, 1979, the Lodge was constituted in the Masonic Hall in New Westminster by the Grand Lodge of B.C. with Most Worshipful Brother William F. McCoid as Grand Master, and denominated No. 184 on the Grand Registry.  On that day, 317 Brethren signed the porch book and 269 remained for the banquet.  In the 1981/82 Masonic year, with Worshipful Brother S.H. Carate presiding, the Emulation Ritual was replaced by the Canadian Ritual.

Langley Lodge Freemasons come from all walks of life to gather together as Brothers at the Eureka Masonic Lodge Hall. Freemasonry in Langley, and our Lodge in particular, is experiencing a renaissance of public interest. The Masons in our Lodge are young, energetic and looking to associate themselves with other similar individuals. In the last two decades, Langley Lodge has seen an influx of members who are young, good-natured, and highly involved within the Lodge and the community.  In addition to annual contributions of food baskets to those in need, Langley Lodge provides $3000 each year to a deserving student in the Faculty of Arts at Kwantlen Polytechnic University, in the form of the Sian Simmonds Memorial Award for excellence in English and History.

For information on becoming a Freemason, go to www.beginyou.bcy.ca.

On May 8, 1956, a meeting was held in the Liberal Hall, in Cloverdale, for the purpose of exploring the possibility of establishing a Masonic Lodge in the small farming community of Cloverdale.  The meeting was chaired by Worshipful Brother Ray Bowell and supported by Past Masters from both Eureka Lodge No. 106 and Joppa Lodge No. 112. Attending this first meeting were 24 Master Masons from the surrounding area. Those at this inaugural meeting moved to approach the Eureka Temple Society to determine if the Brethren could meet in their hall in Langley until a suitable place could be found in Cloverdale.  Petition forms were handed out and the first five Master Masons to sign up were Ray Bowell, F. Hugh, J. Stinson, B. Creelman and L. Atchinson.

The next meeting was held on Aug 2, 1956, where it was moved and passed that Ray Bowell would be the first Worshipful Master, Barry Creelman Senior Warden and Lyall Currie the Junior Warden.  After some discussion the dues were set at the princely sum of $25.00 per year. It was also unanimously passed that the Lodge should be named Cloverdale Lodge, to acknowledge the area where the majority of members resided. A petition was submitted to the Grand Lodge of British Columbia to officially form the Lodge, which was granted.

Cloverdale Lodge No. 168 continues to be one of the friendliest little Lodges in the province.

The Lodge requested to be instituted, and when the District Deputy Grand Master was satisfied, he recommended to the Grand Master that a Lodge should be Instituted.  On October 6, 1990, the Grand Master held a ceremony of Institution at the Eureka Lodge Hall in Langley.  The Dogwood Square & Compass was dissolved and its members became part of Dogwood Lodge, under Dispensation.

On August 23, 1991, the ceremony of Constitution was held at the Gizeh Shrine Temple in Burnaby, approved by the Grand Master.  Grand Lodge declared that Dogwood Lodge was legally constituted and to be known as Dogwood Lodge No. 192 on the registry of the Grand Lodge of British Columbia & the Yukon.

Sadly, many early documents have been lost over time. The earliest document available is a copy of a Lodge Notice from October 1999.  In 2006, the Lodge was close to turning in its charter.  Right Worshipful Brother Large approached the senior Brethren and inquired if they would be interested in keeping our Lodge active.  Of course, everyone was keen to keep Dogwood Lodge going and a meeting was arranged in Langley.  Right Worshipful Brother Large suggested the idea of Dogwood Lodge becoming a daylight Lodge.  Changes were made to the bylaws and the Lodge obtained approval from the Grand Master.  On June 4, 2007, Dogwood Lodge held their last evening meeting at the Elks Hall in Aldergrove.  The new meeting date became the 3rd Saturday of the Month commencing in September, 2007, at the Eureka Masonic Hall.

Our First Worshipful Master under our new Daylight Lodge format was Worshipful Brother Len Fraser.  We started slowly and between 2007 and 2009, we did not have any new members initiated into our lodge.  Since 2009, however, we have had a line of new members initiated, and the social side of the lodge meeting is keeping us busy with many guests at our Breakfast Festive Board on Saturday Morning.

In 2016, Dogwood Lodge celebrated its 25th Anniversary, a Photobook was created by the Anniversary Committee, for members to purchase, and several copies were gifted to a few of the surviving Founding Members.  An Anniversary Luncheon was held at Newlands Golf and Country Club attended by the Grand Master, Most Worshipful Brother Ian Bowman.

In 1923, the Brethren of Eureka Lodge met in a hall above a hardware store on Main Street in a community known as Langley Prairie, population of approximately 5,000 people.  When constituted, there were 24 Master Masons who were members of Eureka Lodge living in the Langley area.

As Eureka Lodge continued to flourish with a steady increase in membership, the brethren, in 1925, appointed a building committee to explore the feasibility of purchasing land to build a standalone Lodge hall in the centre area of Langley Prairie.  On May 13, 1927, two lots on Old Yale Road were purchased for the sum of $500.

Plans were immediately made to construct a two-story building with a Lodge hall on the second floor and multipurpose banquet hall on the main floor.  The cost of construction was forecasted at approximately $5,000, which was covered by selling bonds to the brethren at $50 each, paying six percent interest. Needless to say, very few of these bonds were paid out.  In 1931, the Brethren decided to forego the interest due on these bonds, still very few of the bonds were ever redeemed, and they basically constituted a donation to the Lodge.

As the population of the area continued to grow and Langley Prairie was renamed Langley Township, Freemasonry also continued to grow in the area and Eureka Lodge. Lodge membership was up over 200 Brethren. To assist in the advancement of the Brethren through Freemasonry, Eureka Lodge assisted in the formation of two additional lodges in the area, Cloverdale Lodge, in 1957, and Langley Lodge, in 1979.  Both of these lodges now meet in the Eureka Lodge Hall in Langley.

For years, the Eureka banquet hall was one of the principal halls suitable for social functions in central Langley. It was frequently rented to the general public for weddings, dances and meetings. Other than usual maintenance and updating, no major structural changes were made until 1985. At this time, a major expansion was made to increase the overall size of the building by 30 %, along with the installation of a commercial kitchen. The Lodge hall is one of the oldest commercial buildings in Langley City, however has never been designated a historical building.

One of the most obvious contributions made by the Brethren of Eureka Lodge has been the upkeep and financial support necessary to maintain Eureka Lodge Hall.

Eureka Lodge is home to over four hundred Freemasons in various Lodges and Concordant bodies as well as the maximum use by community organizations including numerous charitable groups.

In 2023, The Brethren of Eureka Masonic Lodge will be celebrating their 100th Anniversary. Preparations are under way to emphasize not only the historical aspect of the lodge but also the involvement in the community. The public will be invited to take part in our celebration by attending an open house at the lodge hall to review some Masonic History and Eureka Lodge’s involvement in Langley’s history.