A journey over land and through Fire

The building you are standing in front of did not begin its life in this location.  The group of Freemasons who built this lodge (St. John’s No. 21) originally consecrated their Lodge in Wellington in 1894. The closure of a mining operation had the Lodge and many of its Brethren relocate to the town of Ladysmith. The original wood building was dismantled and put on rail cars for its journey up the line and was re-built in the location you are at now.  A fire all but destroyed the building in 1912, and the members of St. John’s Lodge No. 21 decided to rebuild in brick and mortar.

More than a century of fellowship and community

St. John’s Lodge No. 21, which owns the building, is not the only Masonic group that uses this temple.  It is also home to Chemainus Lodge No. 114, who sold their building in 1976, as well as a number of concordant Masonic bodies; Eastern Star, Jobs Daughters, Royal Arch, cryptic rite and Allied Masonic Degrees. This building is also used by the town of Ladysmith as a staging area for the Festival of Lights, an annual community event. While the building was being rebuilt after the fire of 1912, the Masons met in the local Oddfellow’s Hall and were able to repay this favour by allowing the Local Oddfellows to use the Temple when their own building burnt down in 1932. You can learn more about the two lodges that meet here further down the page. 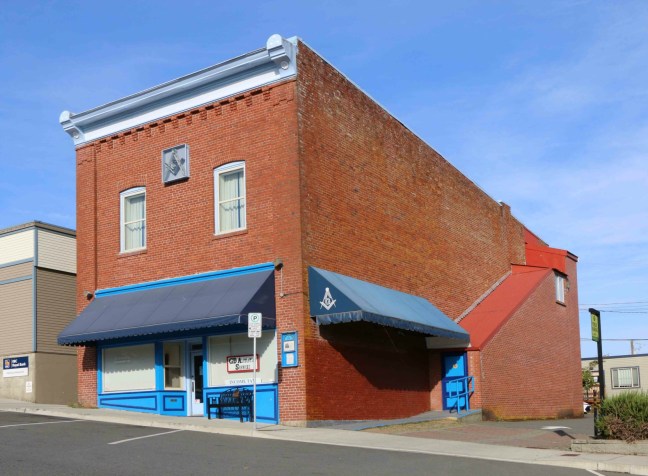 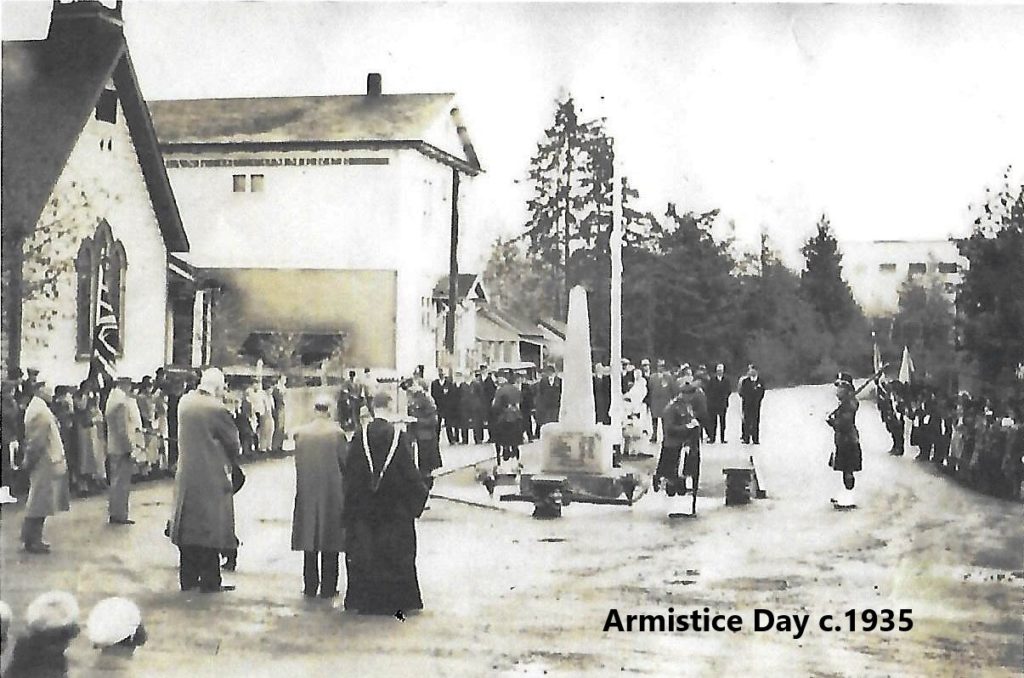 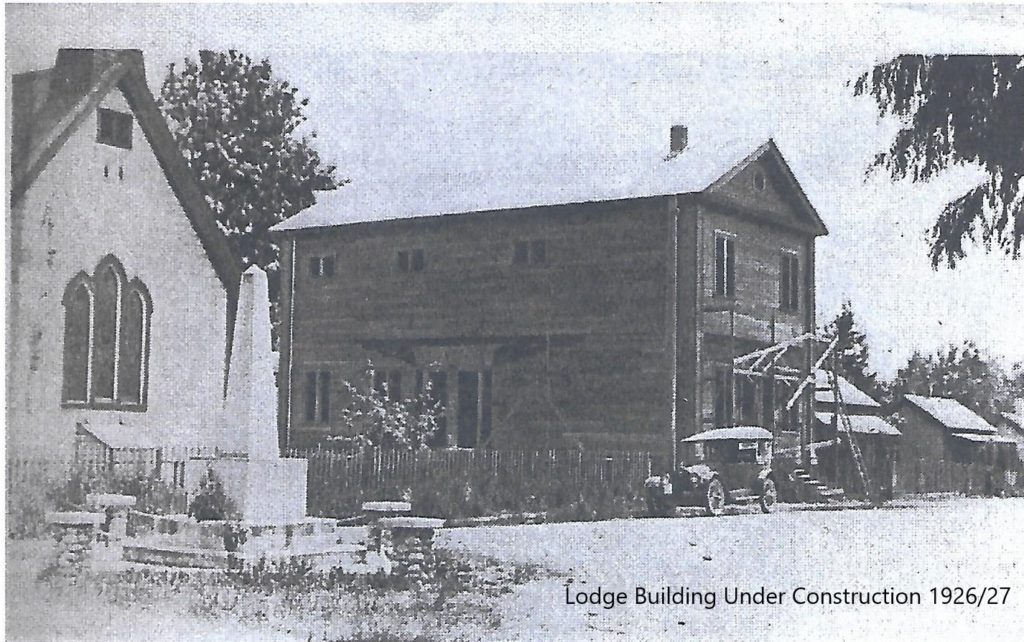 During the past 95 years, approximately 500 worthy Men have petitioned Chemainus Lodge for membership in this honourable fraternity.  No one remains now who can claim the honour of having known the pioneer Freemasons;  John Lund Parkinson, John Alexander Humbird, and James Cuthbert Adam.  For the rest of us, our memories of the founding members of Chemainus Lodge are limited to the priceless documents left behind in the form of the minutes of their Regular and Emergent Communications.

Most Worshipful Brother Alexander Malcolm Manson was the 47th Grand Master of the Grand Lodge of British Columbia, in the year the Brethren of Chemainus petitioned for Dispensation to form a Lodge. A gathering of resident Freemasons was held in the Chemainus Recreation Hall Reading Room on February 10, 1926.  Brother John Parkinson, the senior Freemason attending, was given the honour of chairing the meeting.  26 resident Masons were present.

Having adopted the name of Chemainus Lodge, on March 6, 1926, the Chemainus Masons sent a letter to St. John's Lodge in Ladysmith, along with their Petition to Grand Lodge, requesting support for the Chemainus effort to form a Lodge.  Brother Parkinson received a Letter of Recommendation supporting the request for Dispensation.  Dues were set at $6, and sufficient funds were raised to cover the requirements of forming a Lodge.

In April, 1926, the Brethren were granted Dispensation to perform the functions of a Lodge.  In the period of one year, Chemainus Lodge initiated, passed and raised 15 Brethren.  An Emergent Communication on July 16, 1927, records that the Charter had been received and the Lodge numbered 114 on the registry of the Grand Lodge of British Columbia.

John Lund Parkinson had been elected the first Worshipful Master of Chemainus Lodge and Harold Evans elected Secretary.  Brother Parkinson was a Past Master of United Service Lodge of Victoria and it was largely on this basis that he was honoured with the chair of the new Lodge. The new Lodge adopted the Emulation Ritual of his mother Lodge.

The Chemainus Masons approached St. Michael’s Anglican Church with an offer to purchase a portion of their land by selling shares to the Lodge Brethren.  In August, 1927, the Chemainus Masonic Lodge building was completed.  On completion, the ground floor of the building provided accommodation for the Post Office, Customs Office, and the Canadian Imperial Bank of Commerce.  The bank vault remains a part of this historic structure.

Many wise and skilful Brethren have passed through the chairs of Chemainus Lodge, dutifully recording the business of the Lodge from month to month, and year to year.   In January, 1976, for the good of Freemasonry in Chemainus, the Brethren of Chemainus Lodge placed the Lodge building up for sale. The sale of the building was duly reported in the minutes of the 548th Communication, September 13, 1976.  This move to liquidate assets, although controversial and painfully difficult, would lead to financial stability.  Chemainus Lodge sought temporary accommodation in the basement hall of the United Church and a year later, signed on as tenants of Saint John’s Lodge in Ladysmith.

On December 7, 1890, Worshipful Brother William Stewart persuaded Ashlar Lodge to petition the Grand Lodge of B.C. that a new Lodge be formed in Wellington, then just north of Nanaimo. Grand Lodge denied the initial request stating that three Lodges within a five mile walk, on good roads, were too many.  Through perseverance, on July 7, 1894, St. John’s Lodge No. 21 was constituted in Wellington, with Worshipful Brother Stewart being installed as the first Worshipful Master.  There were eleven Charter members. Today we have a vibrant membership of 69 Masons.

Worshipful Brother Stewart was made a Master Mason in St. John’s Lodge No. 561 in Prince Edward Island in 1858.  This connection, no doubt, contributed to the origins of our Lodge name.  Worshipful Brother Stewart was the first member of St. John’s Lodge to be appointed as District Deputy Grand Master, and he was followed by 21 deserving Lodge Brethren.

James Dunsmuir, owner of the mine in Wellington, closed it and relocated operations to the Town of Ladysmith in 1894.  St. John’s Lodge Brethren continued to walk to Wellington until the Lodge Hall was physically moved to Ladysmith in July, 1901.  The wood frame building was loaded onto company railway cars, and later reconstructed on the site of the present Lodge. The wood frame building burnt to the ground in 1912, and was rebuilt with the masonry brick structure that stands today. Prior to its destruction, St. John’s Lodge was considered to be the largest Lodge building outside of Victoria. Today St. John’s Lodge is the home of several concordant bodies, including Chemainus Lodge No. 114, Eastern Star (Sharon Chapter), Royal Arch, Cryptic Rite, Jobs Daughters (Bethel #11) & Allied Masonic Degrees. Other outside organizations, such as The Ladysmith Festival of Lights use the Lodge as a staging area for Ladysmith Light Up night.

Most of the Lodge furniture was donated by the Brethren.  Right Worshipful Brother William (Bill) Wilson and Brother Clive Davis donated the Secretary’s desk. Brother Bricker donated the Worshipful Master’s chair and the Senior Warden’s chair. The other officers’ chairs have been in use since 1944. In 1944 Chemainus Lodge presented the brass door knocker to St. John’s Lodge.

In 1948, St. John’s Lodge started a tradition that continues to this day, of visitations with our sister Lodge, West Seattle Lodge No. 287, which later became West Seattle Service Lodge, and more recently Alki Masonic Lodge No. 152 of the Grand Lodge of Washington State. Every year the Travelling Square is presented to the host Lodge during the visitation, with the most recent ceremonies included during our annual Installation of Officers. 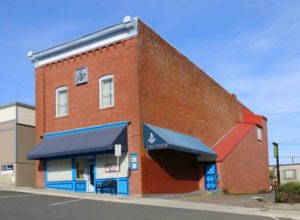