A History as Old as Kelowna Itself

In 1905 the Freemasons of Kelowna founded and were granted dispensation to create St George Lodge No 41.  This is the same year that Kelowna became a city.  The building you are looking at is the 5th home for the Freemasons of Kelowna after fire destroyed the previous 4 lodges over the last century.  You can see some of these buildings in the photos on this page.  As with many other lodge halls around the world, this one has the lodge and dining areas on the second floor with a dedicated business space at ground level.  This is a way for Freemasons to fund their lodge halls and contribute to the local economy.

Over the last century the Freemasons of Kelowna have been integral to the growth and development of this great city. From street names to community centres, mayors and Council people, the past and present members list would be familiar to residents.  This Hall is also home to Kelowna’s “Ancient” lodge Prince Charles Lodge No 153 (ask a Freemason what “Ancient” means) as well as many other groups for men and women of all ages and backgrounds, that make up the broader Masonic Family.  You can read more about the history of this lodge and the other groups that call this building home, as well as some of the charitable works that flow from this building, further down the page. 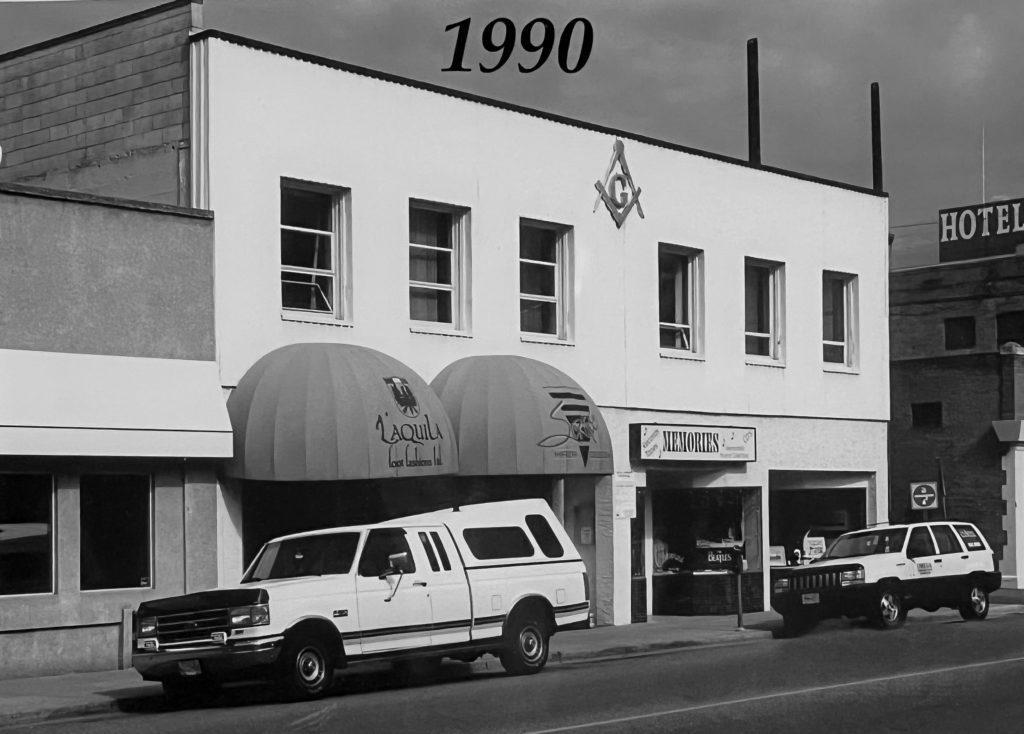 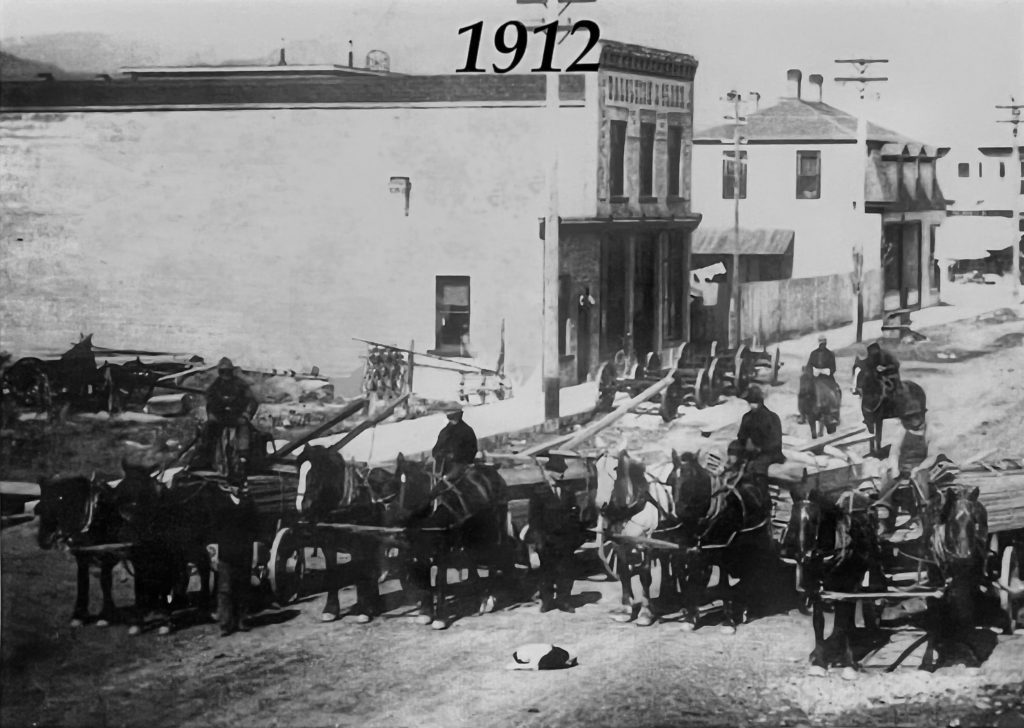 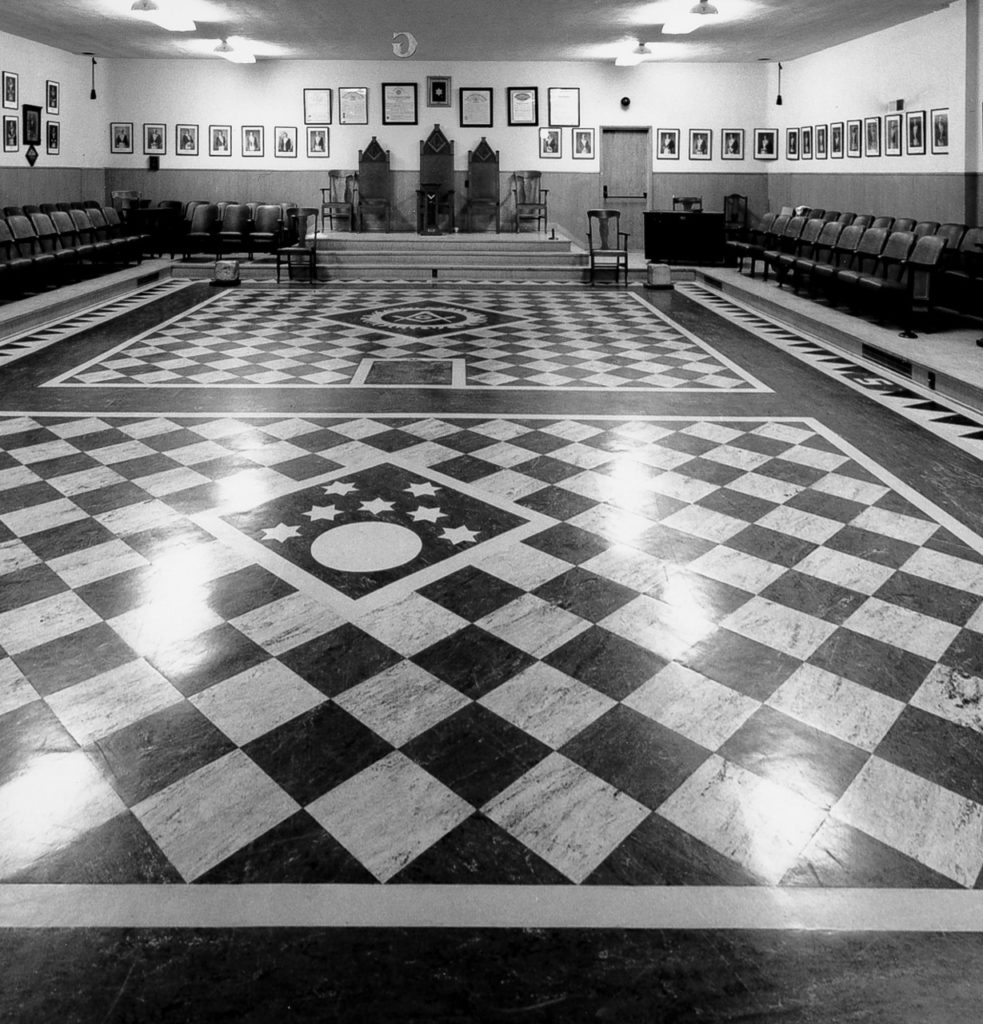 Adversity and adaptability are not foreign terms within Freemasonry. Few lodges today have experienced them like St. George’s Lodge No. 41. This proud and productive Lodge has gathered at 1564 Pandosy Street, in Kelowna, since 1976.

However, finding a permanent Masonic Hall had been a challenge previously largely because of one factor – fire!

St. George’s and the City of Kelowna were both officially founded in 1905, and since that time, fire has impacted or destroyed Masonic Halls four times.

The first St. George’s Lodge was a ‘Moon Lodge’ with meetings only held on a full moon, when the night sky allowed enough vision to travel. St. George’s Lodge rented various locations over the years before building a Masonic Hall in 1951, which they sold before purchasing their current facility.

St. George’s Lodge not only shares its birth year with the City of Kelowna, but has clearly held significant influence with the town’s history and growth. A plethora of streets, buildings and key community facilities share the names of former members - such as: Raymer, Sutherland, Day, David Lloyd-Jones, Knox, DeHart and Meikle.

Over the years, nine mayors, forty-nine councilors, four Freemen, and a former Premier of British Columbia, W.A.C. Bennett, have joined the brotherhood.  Several Masonic organizations make St. George’s Lodge their home, including Prince Charles Lodge No. 153, the Order of the Eastern Star Chapter 62, Chapter No. 17 of the Royal Arch Masons, the Okanagan Preceptory of Knights Templar No. 72, and the Kelowna Shriners Club No. 15.  St. George’s, at one time, was the meeting place for a local chapter of Job’s Daughters, and the Order of DeMolay.

St. George’s was honoured to host the 125th Grand Lodge Communication in 1996. While the pandemic has impacted the current Lodge it remains strong and united and continues as best it can with our community caring and sharing, operating the very popular Cancer Car campaign and the good work of Shriners.

The Ceremony of Institution for Prince Charles Lodge No. 153 was performed on April 25, 1953, in the old St George’s Lodge on the site of what is now the Safeway Parking lot on Bernard Avenue.  The ceremony was conducted by Grand Master, Most Worshipful Brother Laurence Healy.  Worshipful Brother John Smith was inducted as the first Worshipful Master and Worshipful Brother Ross Oatman the first Immediate Past Master.  In all, 41 Brethren were inducted as founding members. Sixteen months later the Lodge was constituted as Prince Charles Lodge No. 153 on the Register of the Grand Lodge of British Columbia. The Ceremony of Constitution and Consecration took place on September 4, 1954. At the Constitution and Consecration, 52 Brethren became charter members of the Lodge.

Some years prior to 1953, a number of Freemasons in the Kelowna area had discussed and planned the formation of a new Lodge to practice the Ancient Ritual. In 1952, a meeting was held in the Milky Way Restaurant on Bernard Avenue to formulate final plans. The minutes of that meeting still exist, to show that the Brethren elected Worshipful Brother John Smith as the first Worshipful Master “for the time being” of the proposed Lodge.  Worshipful Brother Smith would later become a District Deputy Grand Master.  Worshipful Brother E. Ross Oatman was elected as Secretary.

Early on, it was decided that the new Lodge would perform Lodge work in the Ancient Ritual, also known in this jurisdiction as American Ritual.  Our sister Lodge, St. Georges No. 41, practiced the Canadian Ritual, thus it was felt that by adopting the Ancient Ritual, we would introduce the Brethren of Kelowna to an interesting alternative.

Prince Charles Lodge continues on with the practices, ritual and ceremonies envisioned by those early Brothers. We meet on the second Monday of the Month, with emergent meetings on the fourth Monday at 7:30 pm. The Lodge is closed, or in darkness, for the months of August and September.  Annually, in June, we hold an outdoor meeting, at which guests are always welcomed.

For several years, Prince Charles Lodge held fraternal visits to the United States, first with Omak Lodge, then later with William H. Jet Lodge in Wenatchee.  As of this date, our membership stands at 49 officers and Brethren, with Worshipful Master Derek Miller sitting in the East.