This Masonic Hall, at 301 A  Avenue in Kaslo, British Columbia, at the corner of A Avenue and Third Street, is a two-storey wooden frame structure built for local merchants, the Green brothers, as a replacement for their earlier store destroyed by fire.  Local tax records first included the new building in 1894.  Kaslo Lodge No. 25 received its charter in 1895, and in 1897, entered a lease agreement for the addition of the second floor.  This space was then furnished as a Lodge room, which remains largely unchanged.

In 1938, the building was acquired by the Lodge, and is today the property of the Kaslo Masonic Holding Society.  The building is in good condition, and although the exterior is covered by synthetic siding its overall form is retained. It is one of the oldest Masonic Halls in use in Western Canada, and the oldest original wooden structure free-standing Lodge building in British Columbia. The Lodge room upstairs is still in its original state and has held meetings each year since it was furnished in 1896. As of 2020, there are 21 active members of the Lodge. 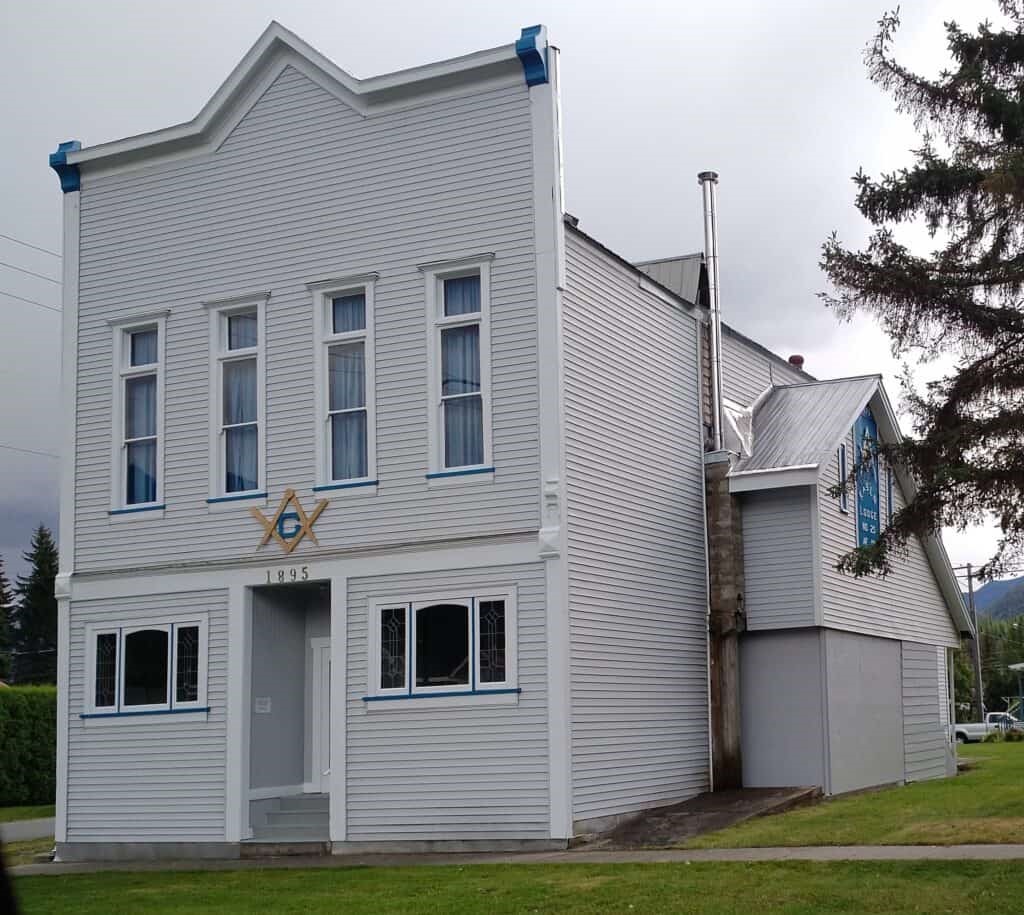 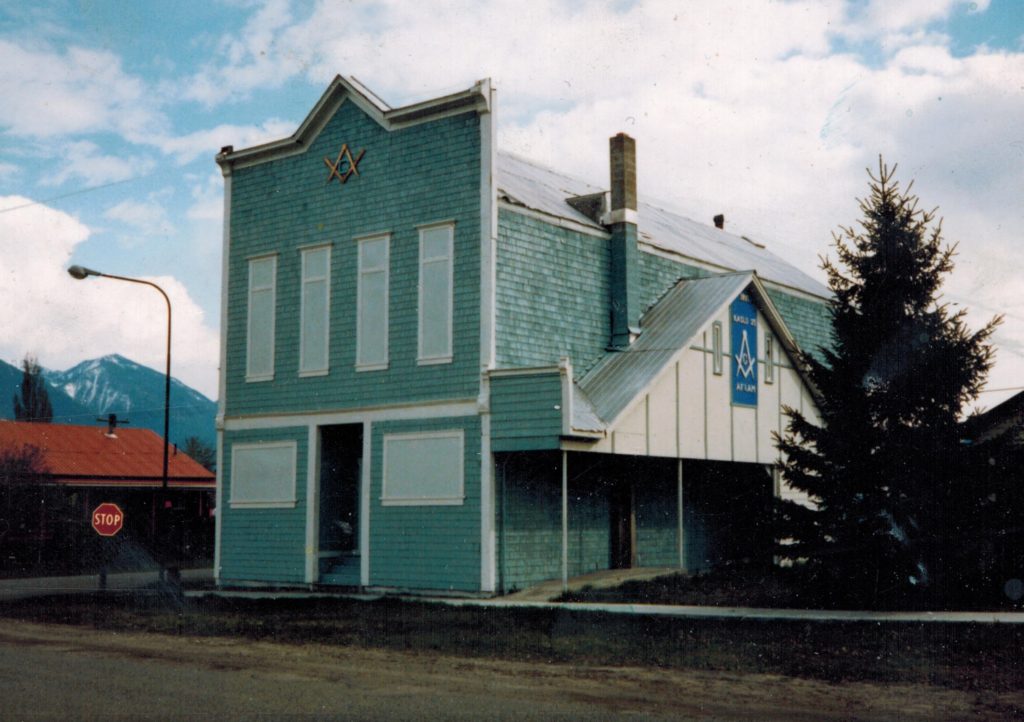 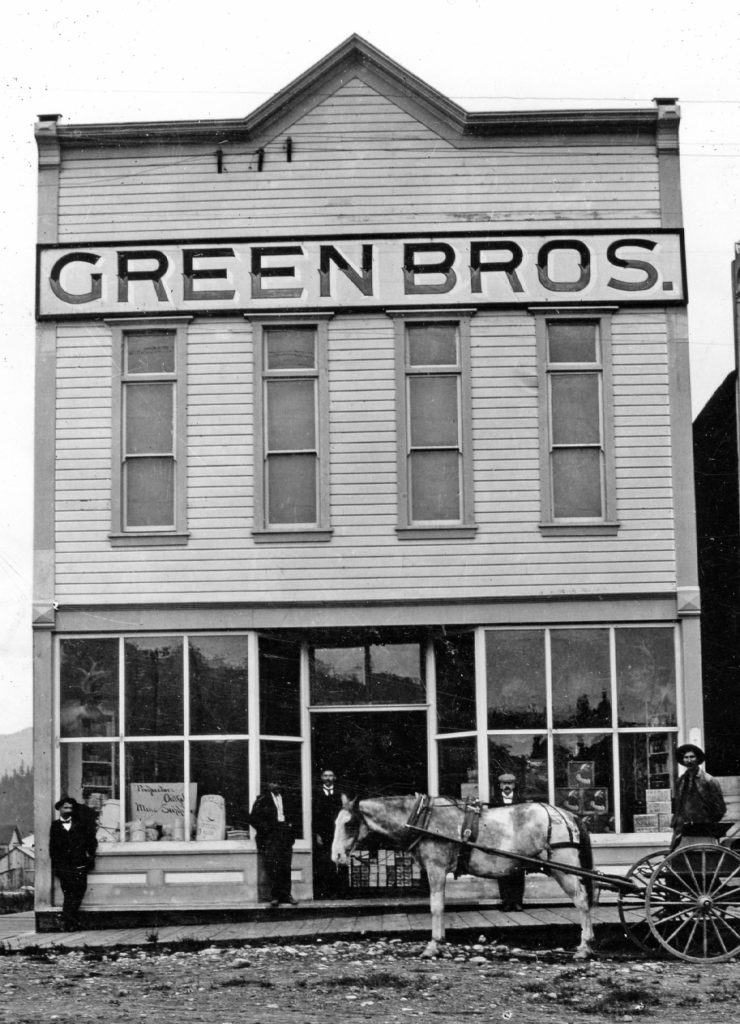 In 1894, after the fire and flood that the city of Kaslo suffered that year, Freemasons of the town combined to obtain a charter for a Masonic Lodge.  A petition was drawn up, signed, and sent to the Grand Master of British Columbia.  The list of petitioners was an interesting one, the signers coming from all areas and occupations - miners, construction workers, merchants, jewelers, hotel keepers, prospectors, railway employees, etc.  There was no tie between the signers other than Freemasonry.  Five came from Ontario, five from the United States, four from what was then the Grand Lodge of Manitoba, four had been members of other Lodges in British Columbia, two from Scotland, and one from Nova Scotia.  The list gives a fair cross-section of the Kootenay people at that time.

In August 1894, the Deputy Grand master visited and found a “nice Lodge room, well-furnished and a number of very worthy Freemasons” and so he reported that the petition should be granted.

The effort to form a Lodge in Kaslo was encouraged by Worshipful Brother Elon Ezra Chipman – a Past Master of an Ontario Lodge, who was destined to become a Grand Master of British Columbia (1902). He attended all meetings and affiliated with the Lodge when it was ready for work. Most Worshipful Brother Chipman served as Kaslo City Clerk from 1896 to 1900. He was appointed by the Provincial Government as Government Agent, Gold Commissioner, Stipendiary Magistrate and official Administrator of the Kaslo District.

The first meeting of the Kaslo Lodge was held October 1, 1894. It was held in a room above W.B. Livingstone's Leather Goods store on Front Street. The location is where the Government Liquor store is today. The first Worshipful Master was Duncan C. MacGregor, a builder of many of the buildings in the city of Kaslo. The secretary was E. E. Chipman. A.J, McMillan was Senior Warden and Alex McKenzie , Junior Warden. According to the minutes of that meeting there were 10 other masons in attendance and three applications for membership. It was to be known as the Kaslo Lodge and would meet on the first Monday of the month.

This Kaslo Masonic building was built in 1894 by the Green Brothers who had lost their store on Front Street in the fire of February 1894. They had a store on the lower floor.  The Kaslo Post Office was in the back of the building.  In 1897, a second-floor addition was added by D.C. MacGregor (contractor). It was reported in The Kootenaian, newspaper of January 2, 1897, that the upper story was to be “fifteen feet in the clear and appropriately fitted up for the exclusive use of the Masonic fraternity. The entrance to the upper story will be from 3rd St." As you will see, many of the furnishings are still in place.  This is the oldest wooden Masonic Lodge building in western Canada still in regular use - practicing Freemasonry monthly for well over a century now. Many of its masons have served as Grand Masters of British Columbia.

The Green Brothers eventually moved their store and Post Office to Front Street. Henry Giegerich of Byers, Green and Giegerich Company (a former Worshipful Master himself) passed over the ownership of the building to the Masons in 1938.  During the internment of 1200 Japanese Canadians in Kaslo from 1942 - 1946, Dr. Shimo Takahara had a medical clinic on the lower floor here, as did Dr. Banno, a dentist.

Kaslo Lodge sponsored the Bluebell Lodge of Instruction in Riondel from 1951 to 1969 on the east shore of Kootenay Lake.  While the Bluebell mine was in operation, many members of Kaslo Lodge came from Riondel.