In the years after WWII, Campbell River saw much growth in its local industries.  The development of hydro power, mining, and the pulp and paper industry brought many Freemasons to the area.  Talks were started in 1947 and by 1952,  a new Lodge had been formed.  Discovery Lodge No. 149 originally purchased the old Vanstone building on the waterfront, but by the late 1960’s, the building was too small to accommodate the growing Lodge.  A local Freemason, Harper Baikie, donated a piece of property on the northern edge of town and the new Lodge building, that you are standing in front of presently, was constructed. This building was designed with a ground floor banquet hall that is used for Masonic as well as community events.

Freemasonry and Charity from a Remote Corner of the Province

Discovery Lodge Masonic Temple is very active with many concordant bodies meeting here including The Scottish Rite, York Rite and the Local Shriners, as well as Jobs Daughters and the Order of the Eastern Star, two Masonic organizations for Women from young to old.  Discovery Lodge No. 149 is also very involved in charity work with its members giving generously to the local hospital and to scholarships for students. They also work with the local Knights of Columbus with their annual Christmas hamper drive.  You can learn more about Discovery Lodge No. 149 and the concordant bodies that meet here in the links below. 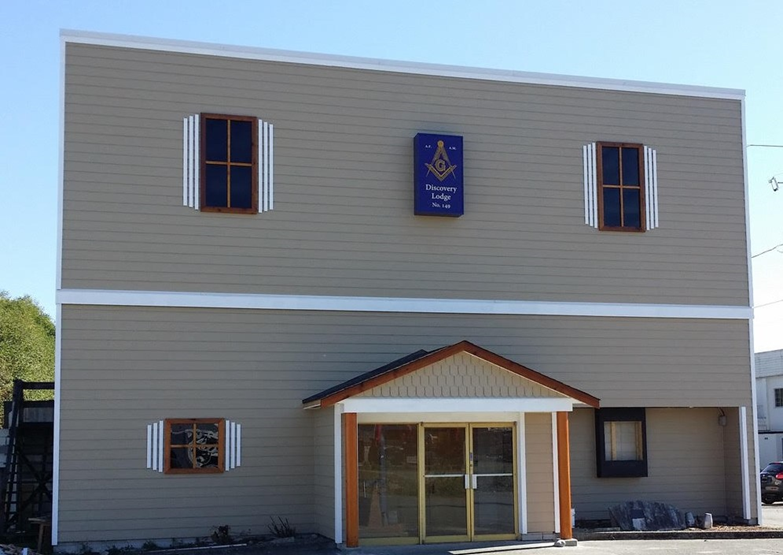 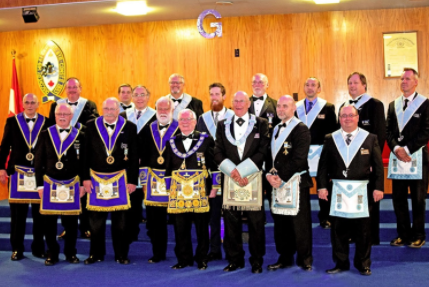 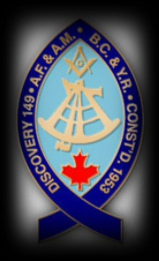 In Campbell River, you can view the often tumultuous and yet beautiful waters of Discovery Passage. Captain George Vancouver gave this name to the passage in 1792, in honour of his faithful ship HMS Discovery. So, it is no surprise that a hundred and sixty years later the brethren of Campbell River named their new Masonic Lodge, Discovery.

In 1947, several meetings took place with numerous Masons planning to set sail a new Lodge. Even in these first meetings, Einar Anderson suggested Discovery as the name of the new Campbell River Masonic Lodge.

It was not until July 30, 1951, when the town grew because of the new hydro dam, Argonaut Mines and the Elk Falls mill, did these meetings take on real meaning. After a phone call to all known Masons in Campbell River, Jake Burgess, Henri Dubeau, Carl Thulin, Jack Caldwell, and W. E. Marshall visited Most Worshipful Brother Murray Mitchell, Grand Master, about an application for dispensation. Robert Strachan, the Deputy District Grand Master, agreed to get the necessary forms. At this same time, others were visiting the local bank manager to obtain a loan to buy the Vanstone building on the waterfront.

On August 6, 1951, a meeting of 36 Masons voted on using American Work as the Ritual and the name of the new Lodge: Discovery was chosen over Sunset, Tranquil, Campbell River, Eureka, Seymour, and Quinsam. A bond drive was headed by Worshipful Brother Waterfield so that the Vanstone building could be bought and remodeled.

Much was done that never appeared in the minutes of the Lodge. Such as when some brethren from Elk Falls Mill happened to notice a new piece of mill felt. They had it sent away to be dyed blue and it ended up as a carpet for the Lodge room. No one could thank Crown Zellerbach because they didn’t know that they had donated it.

By the late 1960’s, the Vanstone building was too small for the ever-increasing numbers. Most Worshipful Brother Harper Baikie donated property for a new Lodge on the edge of town. After many meetings the decision to build a Lodge with a downstairs banquet hall was completed and consecrated on December 8, 1973.

Many around the province know of Discovery Lodge through the work of the Northern Lights Degree Team and their Ritual work, especially at the annual Burn’s Night dinner. In Discovery Lodge, the concordant bodies of Scottish Rite, York Rite, as well the Shriners, Chas-Maris Chapter of Order of Eastern Star, Job’s Daughters (Bethel #29) meet regularly and together they have done much to support the local community.

Each year Discovery Lodge assists the Knights of Columbus with their Christmas Hamper. The members provide volunteers and financial support to the Masonic Cancer Car program.  The Lodge provides financial assistance to the Campbell River Hospital and the Shriners’ hospitals. Scholarships for local students are made available and on occasion, support for students in a Mexico program. The Lodge provides the hall for special needs young people’s activities without cost. Like Vancouver’s HMS Discovery, Discovery Lodge No. 149 has been faithful to its crew.