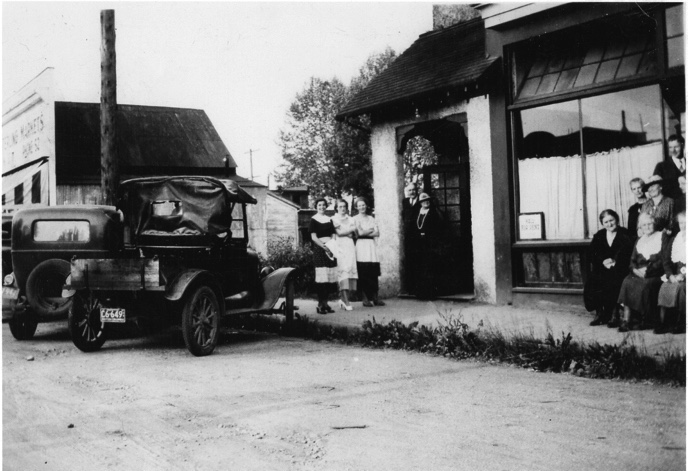 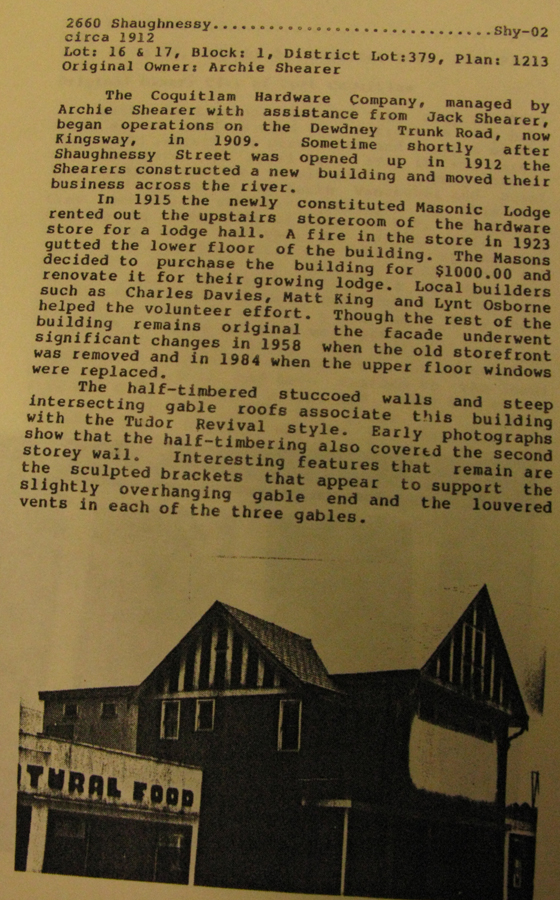 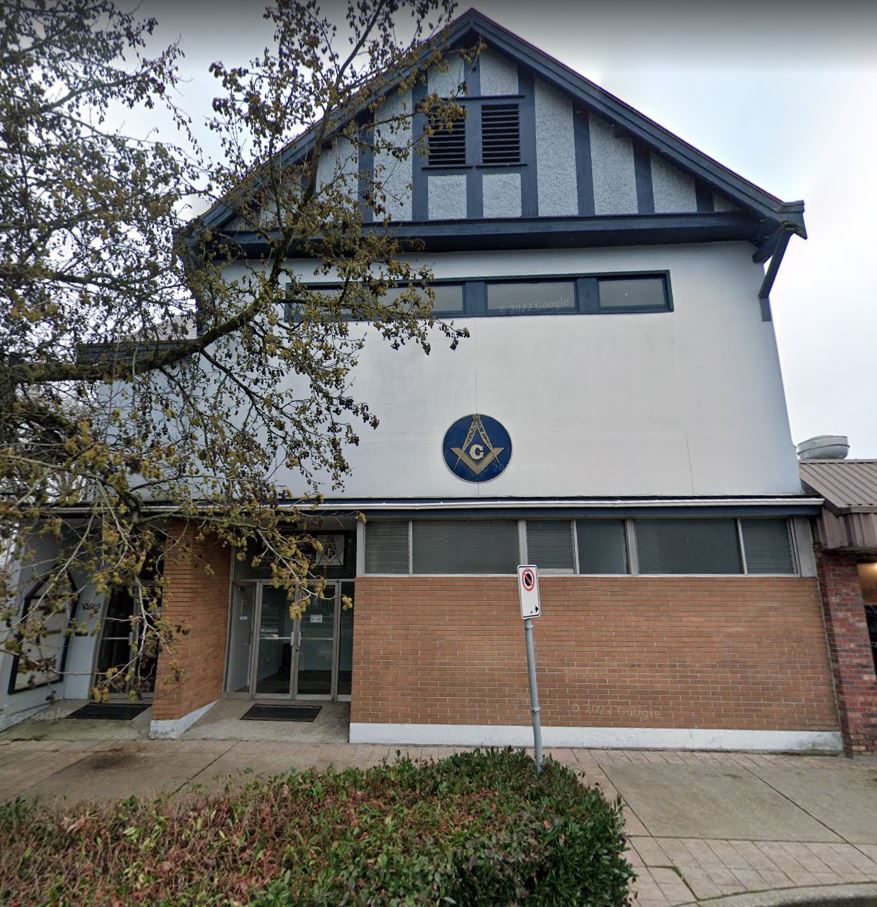 Every organization, whether great or small, has its beginning as a result of an idea.

Thus the idea of forming what is now DeWolf Lodge No. 78 begins.  Our records do not show which one of our Brethren originated this idea, but memories of some elders recall conversation between Brothers Long, Roland and Galer sitting on a pile of railroad ties near the C.P.R. depot on a Sunday afternoon in 1911.

Each of these Brethren were eager to have a Masonic home of their own where they could attend Lodge meetings regularly. The nearest Lodge at this time was 9 miles away and transportation back then was limited.  After talking over the matter and studying it from various angles it was decided the time was not appropriate.  The real estate boom, then at its height, had developed unsettled conditions in the city.

The matter was then discussed in 1913, when the community had normalized and there seemed an opportune time to organize a Lodge.  A meeting was called on April 16. 1913, held at the Municipal Hall on Dewdney Road.  Brother Galer acted as Chairman with 28 members of the Craft in attendance. A motion was passed that application for a Dispensation to form a Lodge be started as soon as possible.  Appointments were made to fill principal positions, and the search to find a suitable location to meet was begun.  The Brethren were optimistic about the city’s future greatness.

Considerations for a location included purchasing a lot from the C.P.R. for construction of Lodge building, purchasing the Marrs Store, and renting the Agricultural Hall.  Other properties were available at various prices from $1400 to $3000.  Several choices for Lodge names were discussed, including “Coquitlam”, “Acacia”, “King George”, “Connaught”, “Sunset”, and “DeWolf”. Each of these names had supporters and opponents.  During discussion it was determined that a name pertaining to Freemasonry would be most appropriate.  Locally, no name was more honoured than that of DeWolf.  Dr. W.A. DeWolf-Smith, then Grand Secretary, was connected to the well-known DeWolf family of Wolfville, Nova Scotia, through his mother.

The next discussions centred on the form of work, or Masonic ritual, to be practiced by the Lodge.  It was adopted and passed that the American ritual of Union Lodge No. 9, in New Westminster, be used.

On October 29, 1913, a meeting was held with twenty Brethren in attendance.  The various committees presented their reports. The Hall Committee reported that Brother Shearer would rent them space at $25 per month for the first year and $30 per month for the following two years.  This offer was accepted and a lease was prepared.  The Brethren present pledged $20 each, to be paid within four months, with the understanding the Brethren would be repaid when the funds were available.  The Furnishings Committee were instructed to furnish and heat the building, and a motion was passed that the Junior Warden and Treasurer be given authority to sign cheques.

On November 23, 1913, the first of many meetings was held at DeWolf Masonic Hall with 14 Brethren present, and Very Worshipful Brother DeWolf-Smith sitting as the Worshipful Master in the East.  An application for Dispensation was granted, dated May 6, 1914, by the Grand Master, Most Worshipful Brother James Stark.

The Lodge was duly organized, and officers were invested by Right Worshipful Brother J.W. Carmichael, District Deputy Grand Master, at a meeting on May 19, 1914.

An organizational meeting chaired by Worshipful Brother Duncan G. McLellan, was held February 26, 1921, at the Odd Fellows Hall, 2214 Main Street, Vancouver to begin the process of creating the new Lodge.

Most Worshipful Brother Andrew McCreight Creery was the 46th Grand Master of the Grand Lodge of British Columbia, in the years 1922-1923 during which the Brethren petitioned to form a Lodge Under Dispensation to be known originally as Douglas Lodge.  There were seven Emergent Communications of Grand Lodge during his term of office, five of which were presided over by him, the fifth of these was held on July 24, 1922, to constitute Douglas Lodge No. 97 at the Oddfellows Hall.

By the time the Lodge was formally constituted, the Lodge’s name was changed to Vimy Lodge No. 97, that name being inspired from the dark days of World War 1. It is thought that some of the Lodge’s 49 original founders and members were veterans of that great conflict, an assumption that is the subject of ongoing research.

Since its inception, Vimy Lodge has annually commemorated the battle of Vimy Ridge with a special “Vimy Night” program.

This poem, dedicated to Vimy Lodge No. 97, was presented by Right Worshipful Brother J.J. Miller at an Emergent Meeting held on March 15, 1922:

THE ODE OF WELCOME.

Written big on the scroll of fame

Where the battle for Right was Fought

Where Liberty with blood was bought

We sons of Hiram, King of Tyre

Bring to thee, most noble sire.

Tyre, The King of Vimy’s meetings,

For most warm fraternal greetings.

These pretty flowers, the eyes delight,

Gifts of nature, fragrant and bright.

These symbols of our love we bring

From Ross the Boss to Tyre the King.

Vimy Lodge adopted the Canadian Work from The Grand Lodge of Ontario in April 1923, which it continues to use to this day.  The Lodge moved to several locations in the Lower Mainland over the years, eventually moving to this location in Port Coquitlam.

Vimy Lodge regularly participates in the Port Coquitlam May Day Parade and in Remembrance Day activities in both Port Coquitlam and Port Moody, as well as supporting Grand Lodge and local community charities.