A place to call their own

This building is located on the same property it was originally built on in 1912, although it was re-positioned on the lot in 1951. Abbotsford Lodge No. 70, who commissioned the building and owns it today, got its admittedly uncreative name because the Grand Lodge of BC used the name on the Railway maps to denote the Lodge.  Name aside, the construction and continued existence of this building demonstrates the dedication and tenacity of Freemasons in Abbotsford who, despite the hardships and rough living of the time, wanted a Lodge of their own and made it happen.  The Cornerstone was laid in a Masonic ceremony on May 18, 1912. You can see a picture of this in the Lodge histories below.

This Masonic Hall not only houses Abbotsford Lodge No. 70 but also Pacific Lodge No. 16 from Mission, the Order of the Eastern Star Electra Chapter and the Bethel of Jobs Daughters No. 20.  These last two Masonic Bodies are comprised of Women and Men and the latter is specifically for young women. Both Lodges donate to local charities like the Canucks Children’s Hospice House and food banks as well as providing Remembrance Day wreaths and bursaries to local youth going to university.  A member of this Lodge, Brother James Blaylock, perished in the D Day liberation of France; he was 33.  Find out more about how the Lodge remembers him and other interesting stories in the full Lodge histories below. 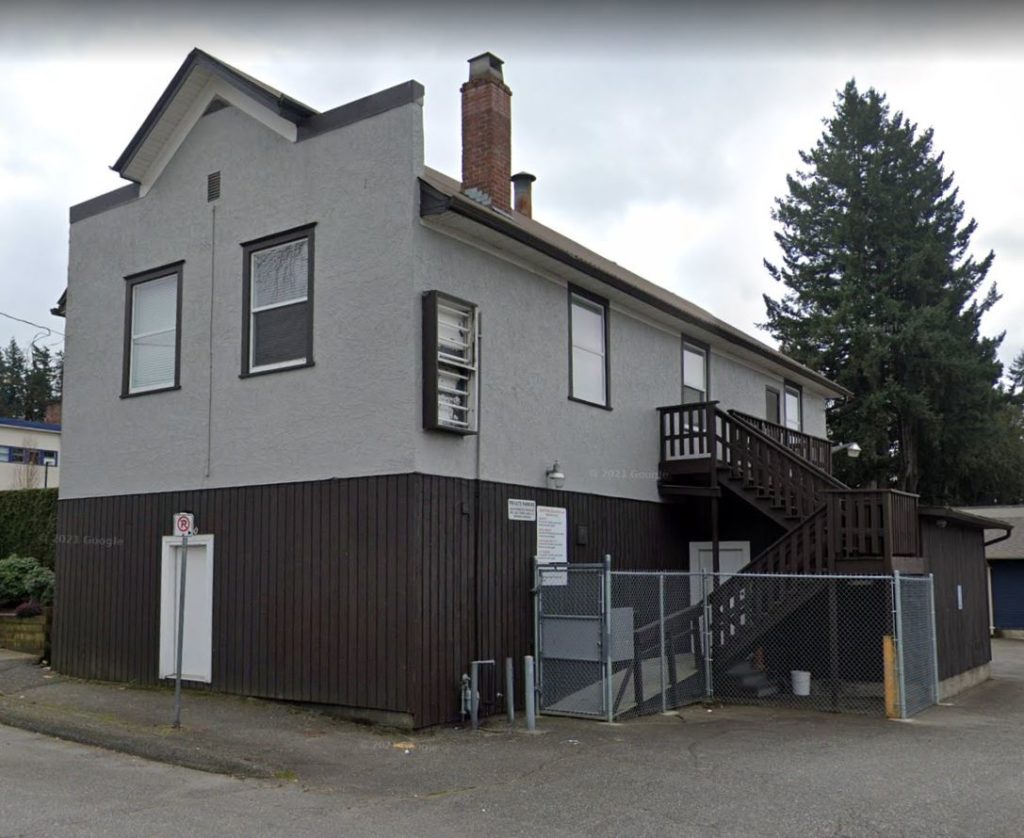 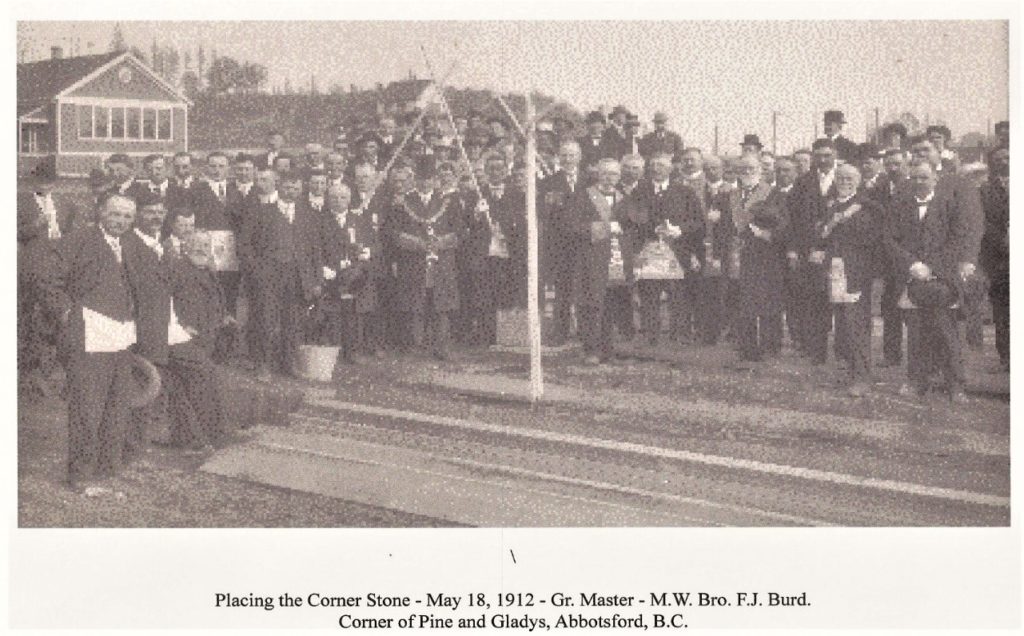 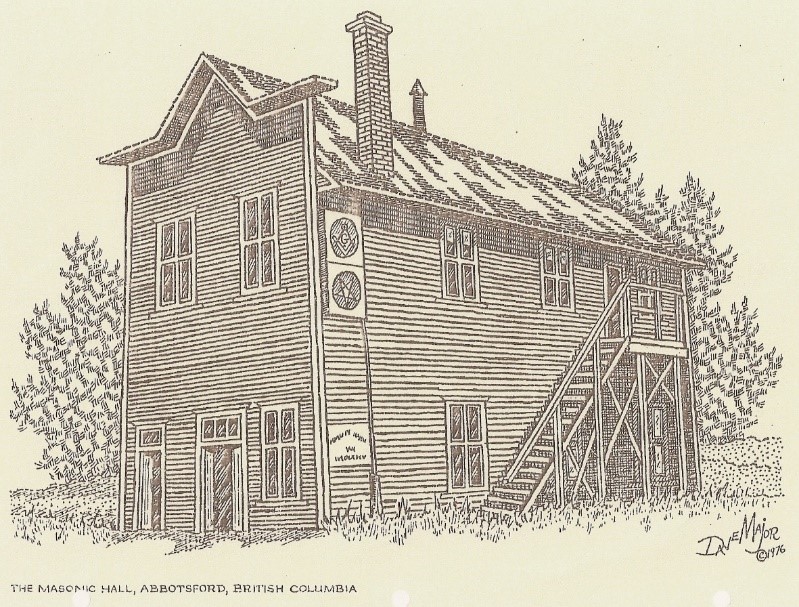 As a Past Grand Master once said, “History is a record of the past, written in the present to help predict the future”.  Our beginnings started when an enthusiastic group of Freemasons felt it was time to form a Lodge in Abbotsford. They realized a building would be required and decided to construct one on the same property where it still stands today. The building was constructed between May and September of 1912, and was finished in time for the first meeting on October 12, 1912, which celebrated the Institution of Abbotsford Lodge No. 70.

These early Freemasons faced many challenges. Since travel was primarily by horse and buggy or by train, it wasn’t until May 11, 1920, that all officers were present together and signed in.  An interesting bit of trivia involves the smoking of cigars: in 1913, Abbotsford Lodge Brethren voted that cigars would be provided by the Lodge for the Festive Board.  In 1924, the Brethren had a change of heart, and the Lodge stopped paying for cigars, instructing Brethren to bring their own and some extra for visitors.

Special occasions included the annual exchanges between Burlington United No. 93, Sedro Wooley, Washington and Abbotsford Lodge, which began in 1919 and have continued to the present day. They were, and are, always enjoyable events, with Sedrow Woolley treating the visitors to oyster stew and Abbotsford reciprocating with moose stew at the festive board.

In 1955, it was decreed the Worshipful Master should be addressed as such, and not “Sir” as had been done previously.  In 1958, it was moved and passed that the building was to be called a Masonic Hall.

The Temple Company was founded in 1912.  Dr. Swift was the first President and purchased the first shares of the Temple Company, which sold for $100.00 each.  Brother J Ware was the foreman of the construction of the building and he donated his services and knowledge for the good of the craft.

Brother (Sergeant) James Blacklock, of the Canadian Scottish Regiment, died from injuries while taking part in the D Day invasion of Europe on June 10, 1944.  He was 33 years old. Our Empty Chair Ceremony celebrates the life of Brother Blacklock.

Over the years, the Lodge has struggled and other times flourished. However, we are hopeful that with strong leadership, determined and dedicated members, No. 70 will continue until time shall be no more.  May the Grand Architect of the Universe continue to bless our beloved Craft and all who travel down their second Centennial here at Abbotsford Lodge.

This text was produced by the Lodge Historian, the late Right Worshipful Brother Con Neudorf,  who hunted down the papers that today are stored in the Reach Museum in Abbotsford.  Brother Bill Overy took over from him. 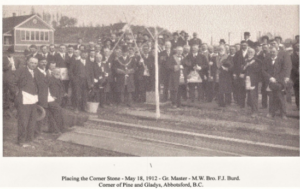 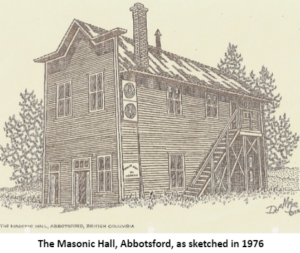 The year 1890 saw several Freemasons settled near the district of Mission on the mainline of the Canadian Pacific Railway.  Many were railwaymen and plans for a Masonic Lodge began.  On April 20, 1891, Pacific Lodge was instituted.  As the membership of the Lodge was largely made up of C.P.R. employees, it was nothing for members to travel nearly 90 miles to a meeting.

A new Lodge hall was completed on April 20, 1892, and Grand Lodge convened a special communication for the purpose of constituting Pacific Lodge, and dedicating the hall.  The reputation for their Masonic work became well established in those early days and Pacific Brethren have endeavoured to maintain and uphold the quality today.  In 1894, disaster struck when a major flood occurred and most of Mission was destroyed including Pacific’s new Lodge Building.  A new Lodge was built above the flood line and was opened in 1895. 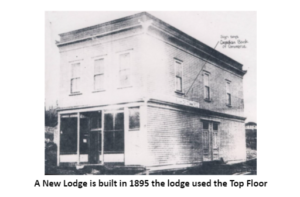 In 1906, there was an interesting event for Pacific Lodge with the election of Most Worshipful Brother Schofield as Grand Master.  He had been Initiated, Passed and Raised in Pacific Lodge.  1907 was the turn of the tide for the Lodge, and Grand Master Most Worshipful Brother Francis Bowser congratulated the membership for their loyal adherence to their Lodge under adverse conditions, and the property was clear of all encumbrances and was revenue producing.

A new Lodge building was opened on October 22, 1907, with the Canadian Bank of Commerce leasing the ground floor. 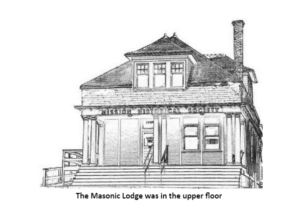 There has never been a serious division over any question, with one exception.  This concerned the site for the new building in 1922. When the decision was finally made for the building of the new Temple on the old site, there was some dissatisfaction resulting in one Past Master taking his Demit because the Master’s station would not be in the East. 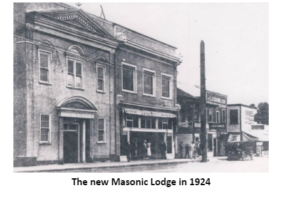 On February 22, 1992, the Lodge celebrated its 100th anniversary and over the next 25 years, much time was spent on the Lodge Building and retaining some of the ancient and beautiful features. 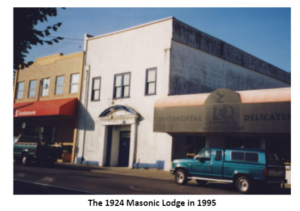 On July 27, 2006, the lodge building was leased to a local dance studio. Arrangements were made for Pacific Lodge to have their communications at Abbotsford Masonic Temple.  This arrangement continues today.  In 2013 the old Lodge building was sold.  When this sad event took place it ended the Lodge’s visible presence in Mission.  Over half of the current Brethren of Pacific Lodge, however, still reside in Mission and they continue to have a strong presence in that city by supporting community programs such as Bikes for Books, which encourages elementary school children to participate in active reading.  Despite many obstacles and ups and downs the Lodge has survived and is still doing well today.